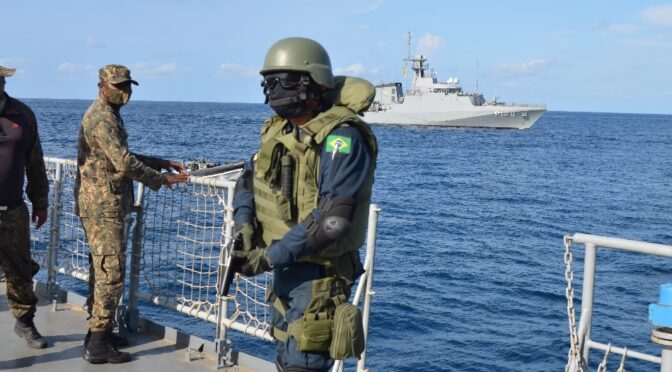 “Whether [working] against COVID, transnational criminal organizations, the predatory actions of China, the malign influence of Russia, or natural disasters, there’s nothing we cannot overcome or achieve through an integrated response with our interagency allies and partners.” – General Laura J. Richardson, Commander, U.S. Southern Command”

Exercise Obangame Express 2022, the largest multinational maritime exercise in Western Africa, concluded its 11th iteration in Dakar, Senegal, on March 18. A total of 32 nations participated, including regional countries like Gambia, Ghana, Liberia, extra-regional nations like France and the United States, and multinational agencies including the Economic Community of West African States and the Economic Community of Central African States.

One extra-continental participant was the Brazilian Navy (Marinha do Brasil), via oceanic patrol vessel (OPV) Amazonas (P120). Brazil’s participation is neither an oddity nor a development that should be overlooked in Washington; the Brazilian military, particularly the navy, has a long history of close relations with many African militaries to increase the Portuguese-speaking nation’s presence and image across the South Atlantic, as well as strengthen military-to-military relations.

A good place to begin this analysis, and to properly explain Brazil’s military relations with African partners, is by listing recent developments. During its voyage to Africa, Amazonas docked in Walvis Bay, Namibia. Two officers from the Namibian navy came aboard and were observers during Obangame Express 2022. As part of its activities throughout the exercises, Amazonas reportedly carried out maneuvers with the navies of Angola, the Republic of Congo, the Democratic Republic of Congo, and Namibia. Amazonas’ mission “contributed to maintaining maritime security in the South Atlantic,” the Brazilian navy explained in a Tweet.

The Brazilian navy is a constant participant of Obangame Express; OPV Araguari participated in the 2021 iteration, while Amazonas was also present in the 2020 version. Amazonas is assigned to the navy’s Southeastern naval group (Comando do Grupamento de Patrulha Naval do Sudeste). The Amazonas-class OPV (in Portuguese, Navio–Patrulha Oceânico: NpaOc) was commissioned in 2012 and has two sister ships, Apa (P121) and Araguari (P122).

By participating regularly in Obagame Express the Brazilian Navy can maintain a balanced level of interoperability with African Navies. In an interview with the author, Andrea Resende, Ph.D. candidate in International Relations at Brazil’s Pontifical Catholic University of Minas Gerais (PUC MINAS), who also monitors maritime security, explained that “the interoperability between the South Atlantic Navies is fundamental to not only send a message of power projection across the South Atlantic but to keep the gears of cooperation and understanding between South Atlantic powers.”

A summary of Brazil-Africa Defense Relations

Apart from strong diplomatic and commercial relations between Brazil and Africa, particularly during the Lula da Silva presidency, defense relations and weapons transfers should not be overlooked.

For example, personnel from the Brazilian Marine Advisory Training Team (BRAZMATT) traveled to Namibia in late February to help train local naval personnel. The Brazilian navy has had a permanent mission in Namibia since 2009 to promote cordial defense relations. Also in February, the Brazilian Defense Attache to Senegal, navy Captain Raphael Gustavo Frischgesell, met with a high-ranking official of the Senegalese military, Div General  Mamadou Gaye. Resende noted that Namibia is a key ally of the Brazilian navy, but the Brazilian armed forces also have, or recently had, “military agreements with Benin, Gabon, South Africa, Nigeria, Senegal, [and] Angola.”

For the period of 2022-2023, the Brazilian association of defense and security industries (ABIMDE) identified several potential customers for Brazilian military technology. In the African continent, the two countries mentioned were Egypt and Mauritania. Brazil has already sold equipment to other regional states. Resende added that “one of the most successful initiatives, in my opinion, was the A-Darter [short-range air-to-air] missile, to be integrated with the [Saab] Gripen fighters, that was developed by a cooperation between Brazil and South Africa.”

These developments are not new. Brazil’s relations with Africa, not just from a defense perspective, go back decades. As Resende notes, during the Brazilian Military Dictatorship (1964-1985), “there was an interest in strengthening the South Atlantic sea powers and keeping the extra-regional powers (and its conflicts) out of the region. This proximity was expanded in 1986 when the Zone of Peace and Cooperation of the South Atlantic (ZPCSA or ZOPACAS) was created, and solidified in the early 2000s with another main interest: to protect our natural resources through cooperation and maintain the area as a peaceful zone.”

A similar opinion is shared by Scott Morgan, a long-time African analyst and president of the Washington DC-based consulting firm Red Eagle Enterprises. Morgan explained to CIMSEC that Brazil has the most comprehensive foreign policy and “the best relations with the African continent,” when compared to other Latin American nations. Even though Brasilia’s African strategy has changed during the years, depending on who is president, Brazil is “engaging in Africa where traditional powers like France keep receiving black eyes on a strategic level.”

During incumbent president Jair Bolsonaro’s government, the relations with African nations indeed lost the same importance they had during the presidencies of Lula da Silva and Dilma Rousseff. The COVID-19 pandemic, the global economic crises, and new missions also negatively affected the strength of South Atlantic relations between Brazil and Africa; however, entities like the Brazilian navy continue to regard African states as key partners. For example, as Resende explained, in October 2021 the Brazilian Navy organized the First Maritime Symposium of ZPCSA, which was “incredibly successful,” as it promoted “pertinent discussions about common threats and challenges, as well [as] reinforced civilian-military relations. In my opinion, this was a very important step for ZPCSA to regain its relevance as a regional institution.”

As for the maneuvers themselves, they generally received positive reviews. “Obangame Express is about the motivation of our people to dig into some wicked problems together and unearth ways to make our waters safer,” said Lt. Gen. Kirk Smith, deputy commander, U.S. Africa Command.

Morgan, from Red Eagle Enterprises, explained to the author one important fact about Obangame Express 2022: “this year’s exercise ranged from the Gulf of Guinea down to Angola. That is a large area to cover and shows how the concerns about piracy are spreading.” Morgan also noted a side meeting that occurred during the maneuvers, the Senior Leadership Symposium. The meeting, held at the Senegalese Naval Headquarters in Dakar, “brought African Naval leaders together with counterparts from Europe, North America, and South America to exchange ideas regarding security concerns. Communications on this level will be vital to address any regional threat,” he explained. As for the future of Brazilian-African naval relations, Andrea Resende of PUC MINAS noted that “the South Atlantic, as the main strategic theater of Brazil, is a permanent feature in Brazil’s national defense and the Brazilian Navy still manages to strengthen ties with African Navies at every opportunity.”

Obangame Express 2022 was a general success, as its objective was achieved: to promote interoperability and strengthen relations between the participant navies and other services. Hopefully, the Gulf of Guinea, West African waters, and the African side of the South Atlantic will become more peaceful and secure in the immediate future. Moreover, these maneuvers are also helpful to increase a navy’s image, display its capabilities, and carry out effective power projection. This is the case of the Marinha do Brasil. Brazil-Africa relations are not a new topic, but it is noteworthy that, regardless of health pandemics or new civilian leaders with different foreign policy priorities, the Brazilian navy continues to regard African states as key allies. The Brazilian navy only deployed one ship to Obangame Express, OPV Amazonas, but the significance of the Brazilian flag flying high in West African waters among partners and allies has significant repercussions for South Atlantic naval and defense relations.

Wilder Alejandro Sánchez is an analyst who focuses on international security and geopolitics. The views expressed in this article belong to the author alone and do not necessarily reflect those of any institutions with which the author is associated. Follow him on Twitter: @W_Alex_Sanchez.

Featured Image: OPV Amazonas carried out maneuvers with the navies of Angola, the Republic of Congo, the Democratic Republic of Congo, and Namibia as part of Obangame Express 2022. Photo Credit: Marinha do Brasil / Twitter Account, April 2, 2022.