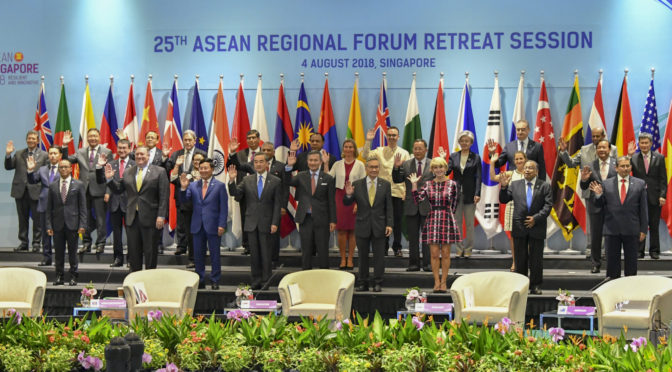 ASEAN and its members are in an increasingly dangerous dilemma. They are under mounting pressure to choose between the U.S. and China in their competition for political and military preeminence in the region. In response, ASEAN member states are maneuvering to maintain their ‘neutrality’ and pursue ASEAN ‘centrality’ in international affairs affecting the region. Their perspectives and roles in this great power competition merit closer examination, as well as how they are adapting to it, and what—if anything—ASEAN can do.

Over the past year, China has taken actions that have alarmed rival South China Sea claimants and stoked the U.S. narrative that China is a threat to the region. Because these small and medium states — alone or in combination — are no military match for China, their response has been to maneuver diplomatically, both openly and behind the scenes. However, the U.S. sees this situation as an opportunity to further its own agenda vis a vis China and co-opt these states in the process.

On July 13 U.S. Secretary of State Mike Pompeo heightened tensions by announcing a ‘new’ policy on the South China Sea. The statement’s political core was that “America stands with our Southeast Asian allies and partners in protecting their sovereign rights to offshore resources­. ­The world will not allow Beijing to treat the South China Sea as its maritime empire.” Pompeo vowed that “We will support countries…who recognize that China has violated their legal territorial claims and maritime claims as well . . . We will provide them the assistance we can, whether that’s in multilateral bodies, whether that’s in ASEAN, whether that’s through legal responses. We will use all the tools we can . . .” (emphasis added). This could include military means.

U.S. Secretary of Defense Mark Esper has outlined an across-the-board reorientation of the Department of Defense with the goal of countering China’s influence in Asia. He has said that strengthening partnerships with Southeast Asian nations will provide the U.S. with an “asymmetric advantage” over China.

The U.S. followed these statements up with a diplomatic full court press on Southeast Asian countries to join it in its campaign against China’s policies and actions in the South China Sea. Pompeo called several key ASEAN foreign ministers seeking their support for the ramped up U.S. initiative. But he apparently did not receive the hoped-for response. Indeed, regional reactions ranged from cautious to negative.

The principle target of the U.S. policy clarification was ASEAN and in particular China’s rival claimants within it: Brunei, Malaysia, the Philippines and Vietnam. But the response of ASEAN was underwhelming. The ASEAN Foreign Ministers collectively issued an unremarkable statement on ASEAN’s 53rd anniversary reaffirming their intent to maintain Southeast Asia as “a region of peace, security, neutrality and stability” amid “growing uncertainties resulting from the changing geopolitical dynamics in the regional and global landscape.”

As William Choong of the Singapore based ISEAS-Yusof Ishak Institute put it, “Challenging China on values and democracy was ‘not going to take off’ in Southeast Asia. We are not going to see the same kind of pushback that the U.S. expects to see in ASEAN. This whole confronting China and kicking down the front door, I don’t think that’s an ASEAN way.” Some states are also concerned that like during the Cold War they could become the pawns or surrogates of great powers and suffer consequences.

Moreover, if the U.S. implements the policy, it will be a double-edged sword. As Shahriman Lockman of the Institute of Strategic and International Studies in Malaysia argued, the U.S presence “has the effect of both deterring but also potentially escalating matters with China…The worst-case scenario is for things to escalate, and then the U.S. gets distracted by something in the Middle East, and we get saddled with more Chinese ships in our waters.”

Some are also concerned that even if they cooperate, the U.S. commitment may not continue. Indeed, some suspect that this offensive may just be a last-minute, superficial ploy to help Trump in his re-election campaign.

As Joseph Liow of Singapore’s National Technical University says, “While U.S. patrols are instrumental to regional security, no ASEAN state would ever declare that because they do not want to be seen siding with Washington against Beijing.”

Indonesia and Singapore have remained neutral regarding this new American aggressiveness. Indonesia said that any country’s support for Indonesian rights in the Natuna Sea is “normal.” Its Foreign Minister, Retno Marsudi, added, “ASEAN must always cooperate to maintain our regional peace and stability and not be dragged into the storm of geopolitical tension or be forced to choose sides.” Malaysia’s Foreign Minister Hishamuddin Hussein struck a similar note, saying Malaysia must ensure it is not “dragged and trapped” in a political tug of war between great powers. Hishamuddin is particularly concerned that the China-U.S. struggle could split ASEAN.

President Rodrigo Duterte of the Philippines publicly stated that he will form policies regarding China that are in its best interests—not necessarily those of others, including the U.S. Even Vietnam, China’s leading regional critic, did not call out China by name in response to Pompeo’s statement but only “welcomed countries’ positions on the South China Sea that are in line with international laws.”

There are good reasons why these countries have difficulty choosing between the two. While they may be more ideologically aligned with the U.S., many have economic and longer-term geopolitical reasons like relative proximity to China that make them reluctant to openly confront it militarily or diplomatically – even with U.S. backing. Beijing will likely use the economic needs of these nations as leverage to prevent their unity against China. As such, Pompeo’s policy clarification overestimated Southeast Asian countries’ overt supportiveness.

It was never realistic to think ASEAN and its South China Sea claimants would automatically support the United States and its increasing emphasis on great power competition with China. Other than perhaps Vietnam – and its support for military intervention is questionable – it is doubtful that backing up the specifics with threats of force will be welcomed in Southeast Asia. These states are already particularly concerned with the military buildup in the region by both superpowers.

A more aggressive U.S. diplomatic and military posture could force regional nations to choose between it and China, and the U.S. may not like the outcome. Indeed, the U.S. is discovering the hard way (e.g. the Philippines) that its soft power relationships in Southeast Asia are neither as deep nor as enduring as it thought. The only way to rebuild the integrity and robustness of its relationships with Southeast Asian nations is for it to demonstrate respect and awareness of their self-defined national interests to a degree equal to its own.

ASEAN countries could contribute to conflict avoidance by individually or preferably multilaterally expressing opposition to the U.S. and Chinese military presence. There has already been some movement in this direction. After one incident in October 2018, Ng Eng Hen, Defense Minister of Singapore, a U.S. strategic partner, said that “Some of the [US-China] incidents are from assertion of principles, but we recognize that the price of any physical incident is one that is too high and unnecessary to either assert or prove your position.”

Philippines President Rodrigo Duterte has said that the threat of confrontation and trouble in the waterway comes from outside the region. Malaysian Prime Minister Mahathir Mohamad then argued that “if the strategy does not include sending the Seventh Fleet into the area, we are welcome to that…big warships [in the South China Sea] may cause incidents and that will lead to tension.” In response to the new U.S. statement, Malaysia’s new Foreign Minister Hishamuddin Hussein called for the big powers “to avoid military posturing.”

Indonesia’s Foreign Minister Retno Marsudi has said that it is “important for ASEAN to keep sending out messages to great powers involved in the dispute to maintain regional peace and stability in the South China Sea.” Considering previous relevant statements by high-level Indonesian government officials, this appears to be a plea to both China and the U.S. to cool tensions and exercise more restraint in their military operations in the region.

However, ASEAN is far from united on this issue—in part because it primarily concerns China’s rival claimants: Brunei, Malaysia, the Philippines, and Vietnam. So far the voicing of these concerns has not had the desired effect. An escalating and strengthening chorus of concern could help reduce the potential for conflict and confrontation. As ASEAN states run out of diplomatic maneuvering space, this may become their only option other than openly casting their lot with either the U.S. or China.