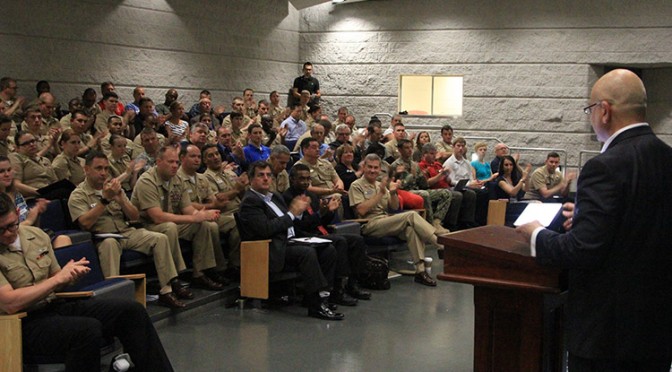 This piece was originally published by the Athena Project. It is republished here with permission. Read it in its original form here.

Wednesday’s Innovation Jam onboard USS ESSEX (LHD 2) was an important and monumental moment for Naval Innovation.

The event was sponsored by a number of organizations, including Commander Pacific Fleet, SPAWAR Systems Center Pacific (SSC Pacific), the Office of Naval Research (ONR), and the Office of the Chief of Naval Operations. The support of such senior leadership for Deckplate Innovation made the event a resounding success, demonstrated in spades through awarding not one but two Sailors $100,000 to fund their concepts through prototyping and transition.

That’s the important part. Ideas born out of frustration, perseverance, and a quest to make the Navy better have been funded. However, the significance of the Innovation Jam is beyond the funding.

During the Innovation Jam, the assembled crowd of Sailors and government civilians listened to senior uniformed leadership within the Navy, like the Commander of the Pacific Fleet, Admiral Scott Swift; The Deputy Chief of Naval Operations for Readiness and Logistics, Vice Admiral Phil Cullom and the Master Chief Petty Officer of the Navy Mike Stevens. The three military speakers kicked off the event with a volley of support for The Athena Project, Tactical Advancements for the Next Generation (TANG), The Hatch, The Bridge, and other efforts to bring about positive change.  Each message resonated with the entrepreneurial and intraprenurial philosophies.

The voices of those senior leaders, combined with civilian thought leaders such as Dr. Nathan Myhrvold, the first Chief Technology Officer (CTO) of Microsoft and founder of Intellectual Ventures and Dr. Maura Sullivan, the Department of the Navy’s Chief of Strategy and Innovation, all echoed the a consistent theme:

Innovation is about taking risks.

The sponsorship, collaborative support and allocation of resources serves as a beacon of thoughtful risk taking by senior leadership in the Navy. And, funding two Sailor concepts serves as inspiration to empower all Sailors at all levels to share their own ideas and as a clear signal from the Navy’s top brass that they’re not only listening but that they’re also ready to act.

Over two days in San Diego, six Sailors who presented ideas through innovation initiatives such as The Athena Project, TANG, and The Hatch, were given the opportunity to interface with scientists and engineers at SSC Pacific and ONR to reframe and refine their concepts at an athenaTHINK event before presenting their ideas at the Innovation Jam to a panel of experts, who would decide a winner.

The panel heard the six pitches and, after deliberation, Dr. Russell announced the results:

LTJG McClenning presented his concept which he originally pitched at Athena West 3.0 called the Unified Gunnery System (UGS). The system would provide ballistic helmets equipped with augmented reality visors to the Sailors manning machine guns topside on a warship, and command and control via tablet in the pilot house. Commands given on the touch screen would provide indications to the gunners displaying orders, bearing lines and more. The system would be wired to prevent cyber attacks. The augmented reality capability of the system would mitigate potential catastrophic results of misheard orders due to the loud fire of the guns, and improve accuracy and situational awareness. LTJG McClenning received $500 for his concept, and $100K to develop the idea in collaboration with SSC Pacific.

LT Hughes flew in from Washington, DC to pitch his concept, also from Athena West 3.0. The idea, CosmoGator, aims to automate celestial navigation through installed, gyro-stabilized camera mounts and small-scale atomic clocks to provide redundant Position, Navigation and Timing data to shipboard navigation and weapons systems. LT Hughes’ concept would continually update inertial navigation systems to enable continued operations in the event of GPS denial. Previously, this concept had been explored by the CNO’s Rapid Innovation Cell. LT Hughes received $300 and in a surprise move, OPNAV N4 funded his idea with $100K as well.

GMC Zimmerman’s concept, originally presented at Athena West 4.0, intends to bring virtual reality to the Combat Information Center. Through the use of commercially available headsets, GMC Zimmerman proposed streaming a live optical feed of a ship’s operating environment to watchstanders to increase situational awareness and provide increased capability in responding to casualties such as Search and Rescue. GMZ Zimmerman received $200 for his idea.

LCDR Hsu pitched an idea from Theater Anti-Submarine Warfare (TASW) TANG for a consolidated information database for the litany of data required to effectively manage the TASW mission. The concept, Automated Response for Theater Information or ARTI, would leverage voice recognition software like the kind found in the Amazon Echo or Apple’s Siri, to enable watchstanders and commanders alike rapid access to critical information.

LT Greunke presented a concept that he began developing during his time at the Naval Postgraduate School (NPS) and pitched at Athena West 9.0. His concept leverages virtual reality to more effectively train Landing Signals Officers (LSO) by recreating the simulator experience of an entire building in a laptop and Oculus headset. LT Greunke demonstrated his prototype for the panelists and described a vision for the LSO VR Trainer, called ‘SEA FOG,’ as the first piece of an architecture of virtual reality tools to improve training in a number of communities and services.

OSC Rick first presented his idea for a combined site to host all required computer based training on The Hatch, though he acknowledged that the concept had been a highly visible entry on The Hatch, as well as in previous crowd-sourcing initiatives such as Reducing Administrative Distractions (RAD), BrightWork and MilSuite. His concept is to make universal access tags for civilians, reserve and active duty personnel to enable easy tracking of completed training as well as required training. In his proposal, the host site would combine the requirements of the numerous sites currently hosting training requirements and deliver an App Store-like interface to simplify the experience for users.

Not enough can be said for the courage that all of the presenters demonstrated to take the stage in an nerve-wracking setting and present their ideas. In another good news story, the panelists and the assembled crowd provided feedback to all the presenters, which will assist in the further development of all six concepts.

With the success of the Innovation Jam in the rear view mirror, the process now begins to build on the ideas that received funding. We’ll continue to provide updates of the future successes of the two funded concepts right here on the blog.

This milestone for Naval Innovation is nothing short of monumental. Many can relate to a near exhaustion with the rhetoric surrounding innovation: Agility, fast failure, big ideas, consolidating disparate efforts, getting technology to the warfighters, and certainly partnering partnerships with non-traditional players.  When actions are weighed against rhetoric, it is action that wins, taking the initiative, assuming the initiative to act and moving the needle. And Wednesday, we saw that happen.

This inaugural Innovation Jam will not be a one-time thing. As stated by VADM Cullom in his Keynote Address the event will be coming to every fleet concentration area in the future. Here at The Athena Project, we’ll continue to push initiatives like the Innovation Jam to inspire the creative confidence to present ideas and aid in any way possible to turn concepts into reality.

And, for those wondering how they might get involved in an events like this, support your local Athena chapter, submit your ideas to The Hatch and participate in workshops like TANG! Participation in these, and any innovation initiative will make you eligible for your regional Innovation Jam!

The future looks bright indeed not only for innovation but for action.

And we’re damn proud to be a part of that.

Dave Nobles is a member of the Design Thinking Corps at Johns Hopkins University Applied Physics Laboratory and the founder of The Athena Project. He is also a Navy Reservist with the Office of Naval Research.