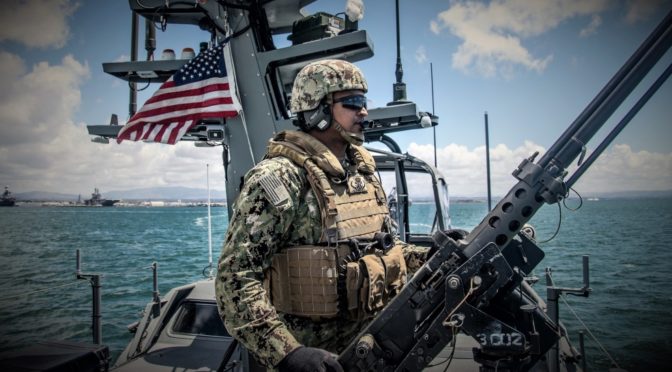 The following article originally appeared in the Marine Corps Gazette and is republished with permission. Read it in its original form here.

In recent years, the Marine Corps has become obsessed with naval integration, and that’s a good thing. Former Commandant Gen. Robert B. Neller called for greater efforts at naval integration, calling it “Green in support of Blue.”1 In his Commandant’s Planning Guidance, Gen. David Berger echoed that call and labeled naval integration “an imperative.”2 The new Chief of Naval Operations, Adm. Michael Gilday, in his confirmation hearing, said that “there is no daylight between us,” referring to himself and Commandant Berger in response to a question about the Marines’ push for closer integration with the Navy. So, with all the calls for integration, where is the Naval Expeditionary Combat Command (NECC)? After all, the Marine Corps itself is a naval expeditionary force according to the Commandant.

You might be asking, “What is the NECC?,” precisely because it is missing from most Marine Corps commentary and thinking. If you were to Google it, you would find it below Northern Essex Community College in the search results. Despite the relative lack of renown, the NECC is and will be essential for emerging and future Marine Corps concepts like Expeditionary Advanced Base Operations (EABO). NECC, established in 2006, is the type command on which the Navy puts the responsibilities to man, train, and equip most of its functions that are not performed on ships, submarines, or airplanes. It is operationally controlled in combined task forces that consolidate the Navy expeditionary combat force (NECF) under a singular command in each theater.

These forces include the Seabees: naval construction units that are similar to but distinct from the Marine Corps’ engineer community and have more capability. The Seabees are the go-to naval unit for building and maintaining runway and port infrastructure, hardening bases, and constructing expeditionary facilities.

The Navy Expeditionary Logistics Support Group is also part of the NECC. Responsible for “providing expeditionary logistics capabilities for the Navy, primarily within the maritime domain of the littorals,” it is a key part of any maritime fight that needs fuel, ordnance, or cargo sustainment.3 It is also responsible for expeditionary communications.

The NECC also contains the Coastal Riverine Force, which is responsible for port and harbor security—defending high-value assets like amphibs and aircraft carriers during strait transits and maritime security. In addition, the NECC has cognizance over explosive ordnance disposal units, which play a critical role in both mine countermeasures and dive and salvage operations. They are optimized for inshore and offshore littoral operations—operations in the very zone that the Marine Corps has identified as an essential part of its future. The NECC is rounded out by the Navy Expeditionary Intelligence Command and training and support elements. All told, it includes some 20,000 personnel, many of whom are currently deployed supporting operations around the globe.

Despite its capability, the NECC has largely been missing from commentary and discussion in and about the Marine Corps. The NECC has not been the focus of a feature article in Proceedings for years and perhaps ever in the Marine Corps Gazette. Most Marines do not know what it is or, more importantly, how it could support them. It has also been missing from published concepts and comments by senior leaders. It was defined in the appendix of “Littoral Operations in a Contested Environment” but never used, and in the 32 pages of the 2016 Marine Corps Operating Concept, it was mentioned once as part of a simple bullet without explanation: “Leverage the NECC.” Gen. Neller’s guidance was a short fragmentary order, but it also did not mention the NECC. Gen. Berger’s planning guidance, while never specifically using the terms NECC or NECF, openly asks the question of:

“whether it is prudent to absorb [some of the NECF] functions, forces, and capabilities to create a single naval expeditionary force whereby the Commandant could better ensure their readiness and resourcing.”

This question about potential contributions of the NECC to EABO should be front and center; the ignorance of what the NECC can do is a loss for the Marine Corps.

In the 2017 Littoral Operations in a Contested Environment concept, the Marine Corps identifies a list of “proposed capabilities.” Many of these capabilities are resident within the NECC, even though the command itself is not mentioned in the document, such as the abilities to:

According to the Navy and Marine Corps’ new concept, EABO will involve employing “forward arming and refueling points (FARPs) and other expedient expeditionary operating sites for aircraft such as the F-35, critical munitions reloading teams for ships and submarines, or … expeditionary basing for surface screening/scouting platforms” in “austere, temporary locations.”4 In brief, that is a lot of what the NECC does. Seabees can build and repair the runways and facilities at FARPs and build expeditionary basing. Naval Expeditionary Logistics Groups transport (and are developing the internal capability to reload) munitions on planes, ships, mobile land-based launchers, and submarines. But to leverage the capabilities of the NECC, Marines first need to understand it and account for it in new plans and concepts.

There has been some progress. Marine engineers and Seabees have been working together to repair and refurbish the “Airport in the Sky” on Catalina Island as part of the DOD’s Innovative Readiness Training Program—a task not unlike what they might be expected to perform on other islands in the Pacific in wartime.5 More recently, exercise PACIFIC BLITZ, which was held across Southern California, included multiple units from the NECC and I MEF, though not necessarily integrated.6 The East Coast planning efforts for the upcoming Large-Scale Exercise 2020 features an “expeditionary syndicate” led by Expeditionary Strike Group 2, II MEF, and NECC co-leads.

During my own time in the Corps, I have spent significantly more time training with partner militaries than I have with the sailors or soldiers in our own military. I cannot remember a training event where I ever worked with sailors from the NECC. This results in myopia across the force at a time when naval integration is becoming increasingly central to our core responsibilities and future vision. Our lack of engagement with the NECC might be the worst example of this myopia, but it extends to the other services as well. Until I attended the Defense Language Institute on an Army installation, I had never met an officer in the Army or Air Force in a professional setting. Sometimes I wonder if there are Marines who think we can defend the Pacific by ourselves, ignoring that the Army alone has more than 80,000 soldiers based in the Pacific and continues to expand their roles.7 I am not arguing that Marine Corps leadership is unaware of the NECC or our sister services, but it is important that the whole force, from top to bottom, has a strong understanding of the NECC’s role and capabilities. The NECC is perhaps the organization that the Marines will work closest with when executing EABO; the NECC will help enable EABO. It is also not the only organization Marines should expect to fight beside. The Army possesses over 100 seagoing vessels that will likely be used for intratheater transport in the littorals and be key to any future Pacific campaign because the Marine Corps and the Navy do not have the same capability. New Army multi-domain task forces will also be present in theater, and the Air Force will likely deploy small units built around its “Rapid Raptor” concept. Marines need to understand these capabilities and train with them in a joint way.

In his paper, “On Littoral Warfare,” Naval War College professor Milan Vego writes that “littoral warfare requires the closest cooperation among the services, or ‘jointness.’”8 That cooperation is rooted in understanding and fostered by joint training. If Marines do not understand or discuss the NECC, it is because they have not been adequately exposed to it. The NECC, by name and definition, is, like the Marine Corps, a naval expeditionary force. The command has the capability to support EABO in everything from running decoy FARPs to maintaining and building fuel sites and repairing port facilities. In order to validate and implement future and emerging concepts, the Corps needs to seek out more opportunities to expose itself to and train with specific partner forces and units. The Marine Corps must increasingly seek joint training opportunities with the units in other services it is most likely to work with and must work to highlight that training and increase Marines’ exposure to the NECC.

1. U.S. Congress, Statement of General Robert B. Neller, Commandant of the Marine Corps, before the House Appropriations Committee, Subcommittee on Defense, Concerning the Posture of the United States Marine Corps on April 30, 2019, (Washington, DC: April 2019).

2 thoughts on “Where is the Naval Expeditionary Combat Command?”