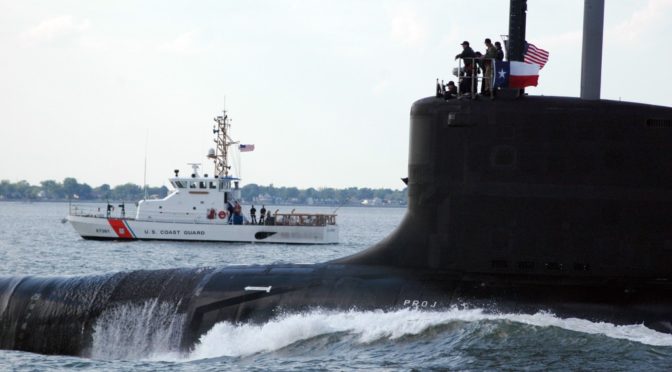 “The proposition that the sea service of the United States should behave as complimentary parts of a national fleet is true to their several natures and functions. It need not provoke controversy.” –Colin  S. Gray, 2001

In December 2019, Chief of Naval Operations Admiral Michael M. Gilday, the released his FRAGO A Design for Maintaining Maritime Superiority. The FRAGO harped on integration with the Marine Corps – mentioning it seven times over the course of the short, eight-page document. This is to be lauded, as General David Berger, the new Marine Commandant, has been pushing for integration as hard or more so from the green side. This naval integration is critical to the Navy and Marine Corps moving forward.

But there is still a piece missing – where is the Coast Guard? The Coast Guard has been increasingly asked to share the burden of maritime policing, presence, and security cooperation in the Pacific, and they have long supported those missions in other waters. The USCG has even contributed to U.S. FONOPS in the Strait of Taiwan. Despite this, the Coast Guard was not mentioned a single time in the document. As long as the Coast Guard continues to support Navy missions in the Pacific and elsewhere (and it should), the CNO should make it clear that the USCG is an integrated part of the nation’s maritime force structure. Not doing so only marginalizes one of America’s best tools for maritime grey zone competition and contributes to an overly narrow focus on conventional naval combat.

The most significant line of effort in the FRAGO is lethality. CNO Gilday makes it absolutely clear that lethality is the most important measure of the Navy, which is hardly disagreeable. But a single minded focus on “lethality” and “warfighting” ignores much of the reality in the Pacific. As the U.S. Navy prepares for the possibility of a conventional battle for sea control, every day a mix of commercial vessels, paramilitaries, and maritime law enforcement vessels tangle in constant competition. Admiral Gilday himself writes “We must also succeed in sustained, day-to-day competition, winning future fights before they become kinetic.” But this appears to be only an afterthought, a caveat to his focus on lethality.

The Chinese Coast Guard possesses the world’s largest law enforcement fleet, and by some counts their law enforcement fleet would be the second largest fleet in the world – after the People’s Liberation Army Navy (PLAN). The U.S. Navy is meeting the simultaneous challenge of being prepared for potential conflict with the PLAN and countering day-to-day aggression by Chinese law enforcement vessels below the level of armed conflict. But it doesn’t have to go it alone – the Coast Guard can support these missions too. And perhaps better still – the U.S. Coast Guard can help U.S. allies and partners in the region strengthen and fortify their own coast guards more effectively than the Navy can alone. The Coast Guard is also integral to operations in the Arctic and the Middle East. They operate the only icebreakers owned by the federal government and maintain a permanent presence in Alaska. Cooperation and integration between the Navy and Coast Guard is essential for supporting an increased naval presence in the Arctic and protecting “increasingly vital” economic corridors like the Bering Strait. In the Middle East, the U.S. Coast Guard has maintained their largest detachment outside the United States since 2002 with 5th Fleet in Bahrain.

Some observers have raised objections to including the Coast Guard in the U.S. response to Chinese belligerence and encroachment in the South China Sea – it has repeatedly been a focus of commentary without generating a consensus. Generally, these objections are based on the small size and meager funding that the Coast Guard has and how the Coast Guard would be unprepared if a shooting conflict broke out in the region. Both of these are reasons why the CNO needs to plan for and mention the inclusion of the Coast Guard in his guidance to the force and make them a part of the larger conversation. Ignoring the Coast Guard, minimizing their potential contribution, or leaving them out of the discussion entirely would only serve to exacerbate these two issues. The Coast Guard is already supporting operations in the Southern and Western Pacific and it would be unwise to ignore this reality.

Recognizing the unique value that the Coast Guard can provide in support of national security missions is also valuable to the Navy. If the Navy believes itself to be undermanned and underfunded as its leaders have recently argued – increased integration with the Coast Guard can be a way to offload some missions and relieve a small piece of that burden. Arguments have been made for standing up a dedicated Coast Guard force for patrolling in the Pacific, which could serve as another means to reprioritize the Pacific over the Middle East where the United States has maintained a permanent USCG presence for almost two decades.

In keeping with the intent of the CNO’s FRAGO, one way the Navy can increase its focus on high-end lethality is to argue for an enhanced and interoperable Coast Guard that can absorb some of the lower-end missions. The 2015 joint Navy-Coast Guard National Fleet Plan, signed by the CNO and the Coast Guard Commandant, affirmed that “Navy and Coast Guard forces maintain a symbiotic relationship that benefits the nation as a whole. This relationship is most noticeable during ongoing operations, but it starts with conceptualization, continues through the planning cycle, and culminates during mission execution.” But unfortunately this sentiment is not captured in the FRAGO.

The CNO dedicated part of his FRAGO to guidance on building “alliances and partnerships” internationally – but it is just as if not more important to build partnerships and interoperability between sister services and other U.S. agencies. The CNO’s FRAGO is a far cry from the level of Coast Guard inclusion that permeated the 2015 Cooperative Strategy for 21st Century Seapower. While CNO Gilday obviously does not have the statutory authorities to direct his FRAGO at the Coast Guard – he can make it clear to his sailors that he views the Coast Guard as playing a critical role in the Navy-Marine Corps-Coast Guard team. That would be moving toward a truly integrated national maritime architecture and force structure. This direction will be critical for preserving U.S. primacy at sea and enforcing rule of law in the global commons.

One thought on “Integrate with the Marines…And Who Else?”