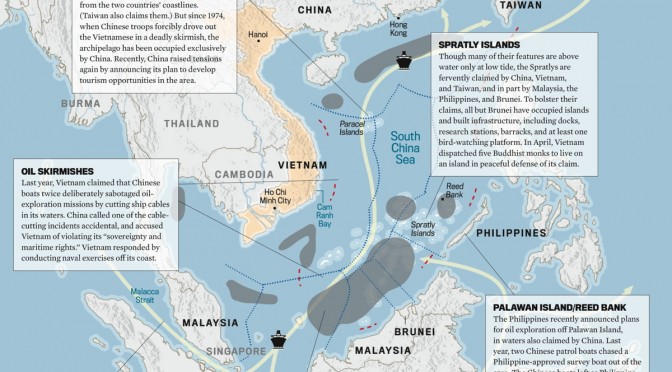 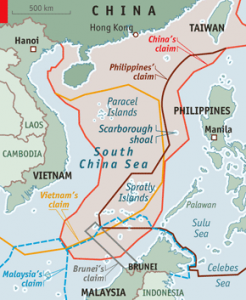 This year, CIMSEC’s DC chapter is holding a series of participatory events focusing on different maritime security challenges and disputes. To do so, we’ll be using an experimental event format with elements of wargamming, simulation, ideation, and crowd-sourcing to elicit creative insights. Our live events will be followed by online crowd-sourcing phases in which the outputs the CIMSEC community at large is invited to participate.

The first of these events will attempt to aid crisis management planners dealing with the South China Sea by cataloging the range of possible actions and drawing insights about their potential effectiveness in achieving their initiator’s objectives.

The objectives developed by each of the country teams are listed below. The subsequent actions developed can be evaluated on their effectiveness here (https://cimsec.consider.it/). If you have a potential action you’d like to propose as part of the crowd-sourcing phase, you can also do so at the above link – just ensure you are not duplicating an existing entry. Whether evaluating the proposals or developing your own it is important to keep in mind the following prompt given to our participants and conditions for the action:

“What actions can your country initiate in pursuit of your South China Sea objective(s)?”
– You are each acting as the nation’s executive government/administration.
– These actions can include but are not limited to military, diplomatic, economic, informational, domestic, or international actions.
– Your actions do not need to achieve any of your country’s objectives in a single move as long as you can make a plausible case that it sets your country on the course to doing so. The actions can also be contradictory or mutually exclusive.
– Be creative, but ground the actions in real-world conditions and capabilities (ex: no state to our knowledge has a sea monster program and cannot therefore “unleash the Kraken”).
– Your actions can occur anytime between the present and three years into the future.
– Your actions cannot presume the response of another actor. Ex: “Conducting joint patrols with Paraguay” would need to be phrased along the lines of “Approach Paraguay about conducting joint patrols….”
– You can include actions that are taken as a result the hypothetical action of another actor within your country as long as your response/action is aimed at achieving your objectives. Ex: Japan “nationalized” the Senkakus/Diaoyus by buying them to forestall their purchase by the Tokyo National Government).

United States
U.S. objectives are for parties to act in accordance with international norms to resolve conflict; parties to exhibit non-escalatory behavior (no coercion or military actions); U.S. to work in cooperation with allies and partners (uphold bilateral agreements); U.S. maintain position in region (both economically and diplomatically); and to maintain freedom of navigation in the SCS.

Indonesia
The Republic of Indonesia represents the global maritime fulcrum for the world economy and trade. Our strategic position as the key link between the Pacific and Indian Oceans highlight our importance to maritime commerce and maritime security. Increasingly our sovereignty in the maritime environment has been challenged by state and non-state actors.

Amplifying SCS objectives:
– Maintain Indonesia’s sovereignty by protecting Indonesian citizens and intensifying economic diplomacy
– Prevent foreign governments from asserting territorial claims of any Indonesian waters/islands, especially of the Natuna Islands
– Protect our key industries of fishing, trade, and energy in the South China Sea and throughout our archipelagic state
– Leverage our strategic location and close economic ties with all parties to act as mediator in regional disputes as needed – our archipelagic waters can be used for innocent passage only
– Develop a military capability in the Natuna Islands or surrounding islands (Borneo) to defend Indonesia’s claim, Territorial Waters, and EEZ
– Resolve territorial disputes through existing peaceful international mechanisms

China
As the Middle Kingdom, we see ourselves as the cultural, political, and economic leaders of the South China Sea. While we believe that it is our right to extend our influence within our region (out to the second island chain), we will do so deliberately mixing realism and pragmatism. We believe that we have the legitimate claim to influence in the region and we will work to undermine other nations that may try to encircle us. We believe that this is a long term competition but that history is moving in our favor. We have the luxury of being patient and will confuse and confound other nations to achieve our revisionist goals

Taiwan
The government of the Republic of China (Taiwan) will pursue peaceful initiatives in the South China Sea that support joint exploration, development, and sharing of resources between littoral states. All such activities will uphold ROC claims to territory in the SCS, as delineated by the eleven-dash line, and will be undertaken separately from efforts of the Chinese government.

Philippines
Protect our territorial claims, while 2) preventing China from gaining control of SCS through peaceful or non-peaceful means, and 3) try and obtain the support of the U.S., Japan and as many other countries for our claims both diplomatically and militarily – to include their Coast Guard units.

Malaysia
Maintain the central government’s domestic credibility by safeguarding Malaysia’s sovereignty and territorial integrity while balancing longstanding economic and diplomatic priorities, including nurturing a special relationship with China and preserving a united ASEAN.