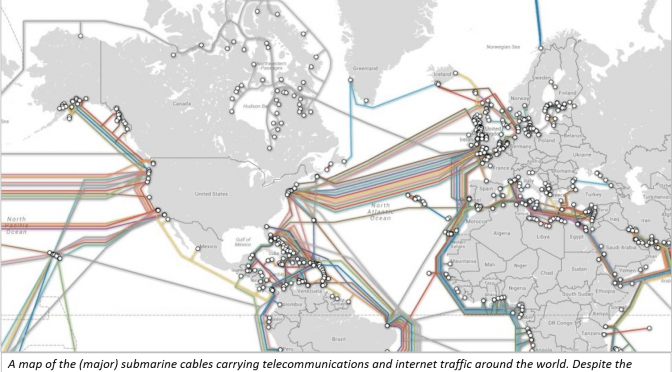 This post originally appeared on Common Sense. You may read it in its original form here.
By Fernando Betancor
Defense experts on both sides of the Atlantic have expressed concern about the increase in Russian submarine activity in the Atlantic Ocean[1]. Russian patrols have risen by 50% to what one unnamed European diplomat described as “Cold War levels”. Not only the frequency of excursions has increased: the submarines are approaching the United States and Europe in areas with undersea cable routes. The cables are used for communications and internet data transmission; along with the fleet of satellites in low earth orbit, they are the spine of our digital world. The United States and NATO allies still rely on these cables for vital military traffic.
So far, the Russians have not been observed doing anything to the cables. But because of their importance, the presence of the submarines is alarming. The Russian Navy could be identifying the best places to cut the cables in the event of hostilities with the West; it could also be making efforts to tap them as a source of intelligence. Or they may have a different, unguessed purpose that is unrelated to the communications cables. What is certain is that the Russians are not simply passing the time of day; the Russian Navy is executing a mission and that mission somehow involves NATO. 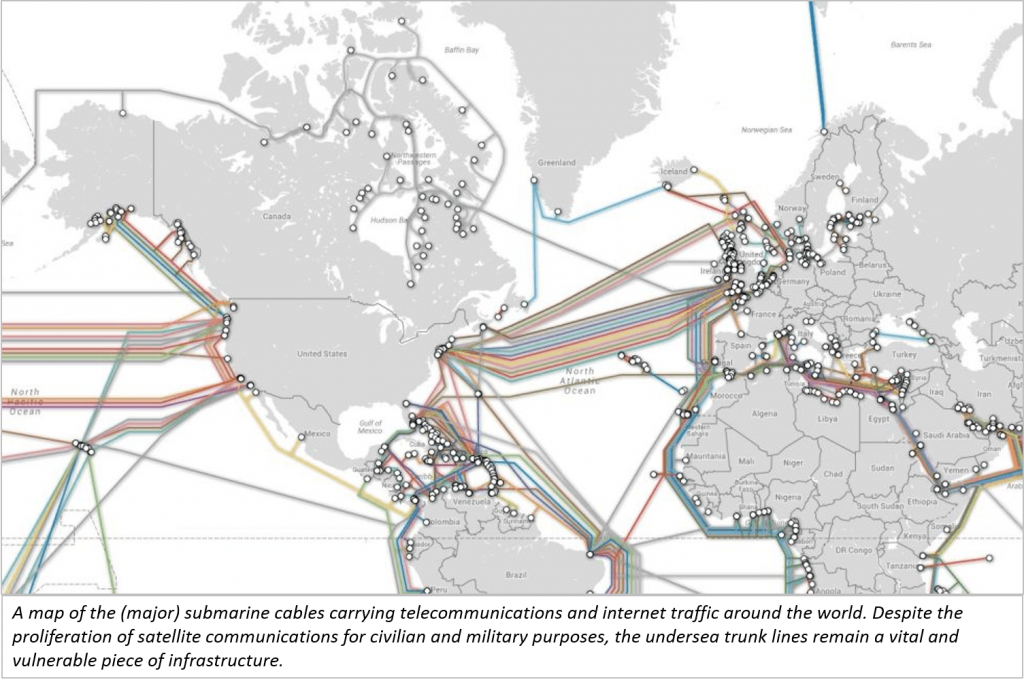 ntelligence gathering and signals interception remains the most probable activity. It has a long and distinguished history in warfare; the capture of a lost set of Confederate orders allowed General McClellan to bring General Lee’s Army of Northern Virginia to battle in unfavorable circumstances in Sharpsburg, Maryland, leading to an important Union victory in the Civil War. It has become critically important since the widespread adoption of wireless and radio communications during the First and Second World War. Everyone knows that the British built the world’s first computer at Bletchley Park in order to crack the German ENIGMA codes, though the incredible Polish contributions to that effort remain overlooked. The United States had successfully broken Imperial Japanese diplomatic codes prior to Pearl Harbor, and were used to prepare the US Navy for the critical Battle of Midway. The US Navy also pioneered the use of submarines and deep-sea submersibles for intelligence gathering, tapping the unencrypted military communications between the mainland and facilities along the Kurile Islands. We continue to deploy these assets, such as the USS Impeccable.
Assisting the submarines is the Russian Navy’s Oceanographic Research VesselYantar[2]. The Yantar is newly commissioned, having come off the Kaliningrad slips early this year, and has nothing in common with Jacques Cousteau and the Calypso despite its scientific-sounding designation. It is an intelligence platform, operated by the Russian Navy for the Glavnoje Razvedyvatel’noje Upravlenije, or Main Intelligence Directorate. Although less infamous than its sister organization, the KGB (now FSB), the GRU is the larger of the two organizations with six times more foreign agents deployed that the Foreign Directorate of the FSB[3]. The Yantar was tracked by the Department of Defense as it approached and followed the North American coast from Canada down to the Caribbean. The Yantar carries deep-sea submersibles of the same kind the US Navy uses for a similar purpose: finding, tapping and potentially cutting undersea communications cables.

After its leisurely voyage, including passing the US nuclear submarine base in Kings Bay, Georgia, the Yantar made its way across the Atlantic back towards Europe. On the 19th of October, the spy ship arrived at its destination: the Spanish port of Ceuta[4]. There it received a warm welcome, with a protected berth and round-the-clock security provided by the port authorities. It took on fuel and consumables while its sailors stuffed their gobs with paella and vino tinto while also engaging in the other profligate activities typical of sailors ashore. As comradely a reception as Ivan could have received in Kaliningrad.
But Ceuta is not Kaliningrad. It is a port belonging to a NATO ally. It is strategically located on the North African coast next to the Straits of Gibraltar, one of the busiest maritime transit points in the world. And it is an easy day’s steaming from RN Gibraltar, a port that Royal Navy vessels often visit, as well as the naval station of Rota, a base leased by the US Navy from Spain. That is where the US is basing four Aegis-equipped destroyers as part of the European Phased Adaptive Approach to ballistic missile defense. What in God’s name is a Russian intelligence vessel doing there?
The Yantar visit is not an isolated incident: this year alone there have been 14 port calls by Russian naval vessels to Ceuta and 58 in total since 2010. In August, the diesel attack submarine, RFS Novorossiysk passed three days in the Spanish colony, with Gibraltar well within range of its SS-N-27 “Sizzler” anti-ship missiles. In April, it was the Udaloy-class ASW destroyerSeveromorsk; and in February another ASW frigate, the Yaroslav Mudry. The city fathers are happy to have 2,000 lonely sailors spending their rubles on “shore leave” and local businesses benefit too. Nothing to comment on in normal times; except that we’re not living in normal times. Russian troops are still in Ukraine; NATO aircraft are intercepting Russian bombers over allied airspace; Turkey is reporting violations of its airspace by Russian drones and jets; and we are not sending troops and equipment to Eastern Europe because relations are warm and fuzzy. 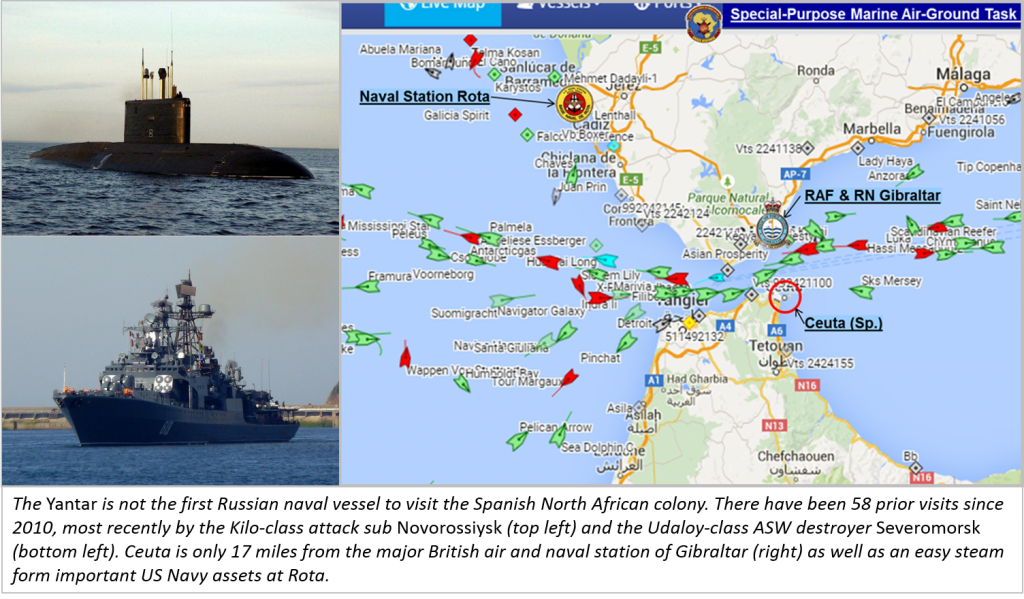 It is long past time the United States took a firmer line with Spain. Spain may be an important ally for us and NATO, with a strategic location and shared interest in the stability of North Africa and the Sahel. It is not a question of gratuitously humiliating or infuriating them. But the US must make it crystal clear to Spain that they must choose their side and stick with their friends. They cannot play both sides: they cannot take American dollars for the use of Rota and Russian rubles for the use of Ceuta. Our concern and extreme displeasure at having half the Russian fleet pass the time of day within a hundred miles of our ballistic missile defense assets must be communicated to the Spanish in no uncertain terms. And the consequences of this perfidious attitude should also be made known – discretely.
Intelligence sharing between the two nations might begin to suffer. The notable successes of Spanish police in intercepting and arresting ETA operatives and potential jihadists in recent years is not due entirely to the keen sense of the beat cops, but to good intelligence and timely cooperation between the Spanish, French and American agencies. If Spain still refuses, the US should consider a relocation of US assets to the Port of Lisbon (USN) and to Beja for the Marine Crisis Response Force – Africa. Both are almost as well situated as the current locations and the Portuguese are not hosting Russian warships.
Unless the US and NATO take firm measure, Spanish will remain indifferent and their “business-as-usual” attitude will continue. It is not only avaricious and in bad faith, it is dangerous to Spain’s own interests. They may come to find, like the Crimeans, Moldovans and others, that once Ivan gets comfortable, he is not an easy houseguest to get rid of. And neither Ceuta nor Melilla are covered by NATO’s Article 5 provision for mutual defense.
Fernando Betancor
Common Sense – Views on the Current State of American Affairs
@fdbetancor
Sources and Notes
[1] David E. Sanger and Eric Schmitt, “Russian Ships Near Data Cables Are Too Close for U.S. Comfort,” The New York Times, 25 October 2015
[2] Sean Gallagher, “Russian Navy’s ‘aggressive’ activity near underwater cables worries US,” Ars Technica, 26 October 2015
[3] The SVR, Sluzhba vneshney razvedki.
[4] “El buque ruso Yantar, cuya ruta Estados Unidos sigue con celo, recala en Ceuta,” Defensa.com, 20 October 2015

One thought on “From Russia With Love…To Ceuta”