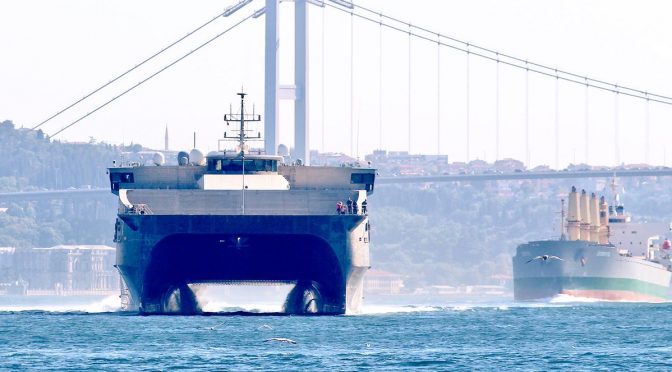 It is an oft-repeated axiom of international law that vessels which serve as auxiliaries to a state’s armed forces may not lawfully commit a belligerent act in an international armed conflict. The presence of civilian personnel aboard many auxiliaries (including those employed by the U.S. Navy) raise law of war rules governing the use of civilian personnel in armed conflict. But why should ship type – particularly auxiliaries – be a factor in assessing the lawfulness of committing belligerent acts? Instead, it should be considered they be able to do so in the same manner as warships.

The similarities between warships and naval auxiliaries are striking. Naval auxiliaries are vessels under exclusive military control for non-commercial service. Both warships and naval auxiliaries are led by a person subject to the orders or direction of a military chain of command, to potentially include a geographic combatant commander, Navy component commander, or a task force commander. Even with recognizing the different statuses of individuals serving aboard naval auxiliaries, personnel aboard both types of vessels typically may incur some degree of adverse administrative, civil, and disciplinary measures from the military for any failure to follow those orders. While there are nuances in how governments may acquire vessels for the exclusive use of its military forces, some of which may include time-chartered or voyage-chartered vessels, all naval auxiliaries share a warship’s right to exercise sovereign immunity because both conduct only non-commercial government service. Finally, both are lawful military targets in international and non-international armed conflicts, regardless of whether the ship is manned by uniformed military personnel or civilians. Yet despite being subject to hostile attacks, naval auxiliaries may only lawfully act in self-defense.

The limitation imposed on naval auxiliaries makes little sense and has important operational implications. It harkens to an earlier era seeking to protect unarmed mariners. But with the targeting leash loosened, the desire or need to impose legal restrictions on ships based on how they contribute to the fight is unclear. Until the rule changes, U.S. Navy auxiliaries have been intentionally designed and utilized to perform only supporting tasks which fall well within current legal norms. These include providing logistical support, or serving as air or seaborne launch pads to transport troops and ammunition. But there is an increasing desire to expand the functions which auxiliaries can execute, including electronic attack, intelligence collection, command and control, and mine countermeasures. To the extent these and other missions could be construed as belligerent acts, the current rule straitjackets auxiliaries in armed conflict. As the potential list of activities performed by auxiliaries expands, the legal restriction against belligerent acts by auxiliaries has imposed an unnecessary hurdle in operational planning and execution.

The presence of civilians aboard many naval auxiliaries should not impose a limitation on belligerent actions based on ship type. Recognizing that noncombatant civilians may not directly participate in belligerent acts, the possibility for the vessel to exercise combatant functions remains undiminished so long as there are personnel aboard who may lawfully carry them out. The domestic legal hurdles in activating or deputizing civilians to serve in a combatant capacity does not eviscerate the underlying principle authorizing naval auxiliaries to conduct belligerent acts. An auxiliary ship manned exclusively by uniformed military personnel (as is the norm for many countries such as Japan) certainly should raise no concerns warranting imposition of any legal limitations about whether it commits belligerent acts or not. Accordingly, even if there may be legal restrictions on who commits such acts, there should be none based on the class of ship or the functions it performs.

Origins of the Prohibition

The current prohibition against belligerent acts by auxiliaries may originate in large part as a legacy of pre-World War I conventions seeking to protect civilian merchant ships from unnecessary harm. Consistent with notions of fairness among the advanced powers at the time, the 1909 London Declaration Concerning the Laws of Naval War imposed a requirement on warships to distinguish between the enemy’s warships and their merchant ships. If a warship encountered an enemy merchant ship, they were generally not authorized to immediately attack and destroy it even if they had war-sustaining equipment and supplies aboard. Instead, warships were required to first search the merchant ship and take it to a prize court if contraband was found. They could destroy it only in exigent circumstances after safeguarding its crew.1 The presumption was that even public vessels (but not warships) under the orders of an enemy government were manned by noncombatant civilians unable to inflict harm to any warship. This guidance was reaffirmed by the 1936 London Treaty, and the U.S. considers these procedures legally valid even today. In exchange for these protections, merchant ships were reasonably prohibited from engaging in belligerent acts, but could act in self-defense.2

Yet there was strong recognition that at some point, any vessel controlled by a belligerent government should be treated akin to a warship. During the negotiation of the 1907 Hague Convention Relating to the Conversion of Merchant Ships into Warships, the British delegation suggested the establishment of a special category of warships called ‘auxiliary vessels’ covering neutral or enemy merchant ships which directly aid the enemy’s military forces.3 Although the proposal was subsequently withdrawn, the parties did create a construct allowing the targeting of enemy merchant ships converted into warships. Notably, the conversion process did not require any physical alterations to the merchant vessel which would give it the ability to fight with traditional warships; it only required the ship to be commanded by individuals commissioned by their government, subject to military discipline, and under government control – administrative changes allowing both the ship and its crew to lawfully fight as combatants.4 Even though it did not directly authorize auxiliaries to conduct belligerent acts, the convention established a path allowing merchant ships and other support vessels to do so.

Disconnect Between Targeting and Conduct

Problems implementing the conversion process in World War I led to a relaxation of the targeting rules against belligerent merchant ships while keeping in place the restrictions against belligerent acts. States such as the U.S. continued to demand an evaluation of armament to determine if a merchant ship was actually a targetable warship. But after this evaluation process exposed German submarines to harm, all merchant ships became eligible targets, and the protections bestowed by pre-war conventions were rendered useless. Any ship conducting war-sustaining activities was targeted and sunk by belligerents during the war, regardless of whether it was legally characterized as a warship or not. Yet even armed merchant ships ordered by a belligerent government to attack enemy submarines (i.e. ships that had arguably been converted into warships) did so at considerable legal risk. One British merchant ship captain trying to ram a German submarine was subsequently executed by the Germans as an illegal combatant.5 Because he acted prior to the issuance by the British Admiralty ordering all British-flagged merchant ship masters to take such offensive measures, it is unclear whether the German court would have found him guilty subsequent to the Admiralty’s orders.

The Shipping Act of 1916 strengthened the U.S. military’s authority to directly control the U.S.-flagged merchant marine fleet in wartime. The law authorized placement of its merchant marine under direct U.S. government control for use as an auxiliary force in support of military wartime needs. The law made a clear distinction between the Naval Reserve, which included civilian ships available for requisitioning by the government, and naval auxiliaries, which were ships used by the U.S. government for its military needs in support of the combatant forces, and manned by a crew subject to its direction. When the law was invoked after the U.S. entered the war in 1917, some vessels reported to a civilian Shipping Board, and others came under direct Navy or War Department control. In practice, ships under military control were armed only for defensive purposes, and unlike their British counterparts were never directed to attack the enemy. Nonetheless, for purposes of the 1907 Hague Convention, they were arguably converted into warships because the government had direct control over the actions of a crew subject to military discipline. Otherwise, they were essentially auxiliaries which lost the targeting protections afforded under the 1909 London Declaration without an accompanying legal right to engage in belligerent acts.

World War II strengthened in practice the legal right of armed merchant ships to engage in belligerent acts because they were so closely integrated with the combatant fleets. Both sides treated them in the same manner as warships, both in terms of targeting them, as well as in the scope of belligerent activity they performed. The Allies struggled to prosecute German Grand Admiral Karl Doenitz for violating a provision of the London Naval Treaty of 1930 affirming the requirement to avoid destroying merchant ships unless necessary, and only after safeguarding the lives of merchant ship crews prior to destruction. Doenitz was ultimately acquitted of the charge in large part because the Allies also practiced unrestricted submarine warfare, targeting enemy merchant ships and merchant mariners because they were deemed combatants integrated with fighting forces.6

Even as World War II saw the de facto incorporation of each side’s merchant marine into their armed forces, the U.S. continues to restrict auxiliaries from committing belligerent acts based on its interpretations of the law of naval warfare, while also recognizing them as lawful targets in international armed conflict. It carefully scrutinizes the intended mission of each ship to determine if it needs to be ready to commit belligerent acts. If it does, it is commissioned as a warship (i.e. with a “USS” designation) rather than brought into service as an auxiliary (i.e. with a “USNS” designation). Any changes in mission may require adjustments in the ship’s status. Although seemingly just a paper drill, the reality is that it significantly impacts manning, maintenance, planning, and operations, and reduces the flexibility of the operational commander in executing desired missions.

There should be no prohibition against auxiliaries committing belligerent acts. They are fully integrated into naval forces for the sole purpose of prosecuting the conflict onto the enemy, and as such are lawful targets. Indeed, the enemy will evaluate the ship’s targetability based on the platform rather than the personnel aboard, whether military or civilian. Potential law of war restrictions on embarked civilian personnel to exercise combatant functions are only administrative impediments that can be adjusted consistent with domestic law procedures, and should have no bearing on whether the execution of belligerent acts should be limited based on ship type. When subject to the direction of the armed forces on non-commercial service, naval auxiliaries are not innocent merchant ships posing no threat. These vessels execute a vital military mission and as such are lawful targets as much as any traditional warship. To the extent naval auxiliaries have the capacity to commit belligerent acts, it should be lawful for them to do so.

Commander David Lee is a military professor at the Stockton Center for the Study of International Law, located at the U.S. Naval War College in Newport, RI. He most recently spent five years practicing international and operational law in support of U.S. Naval Forces Europe/Africa and U.S. SIXTH Fleet in Naples, Italy.

4. 1907 Hague Convention Relating to the Conversion of Merchant Ships into Warships, Articles 2-7.