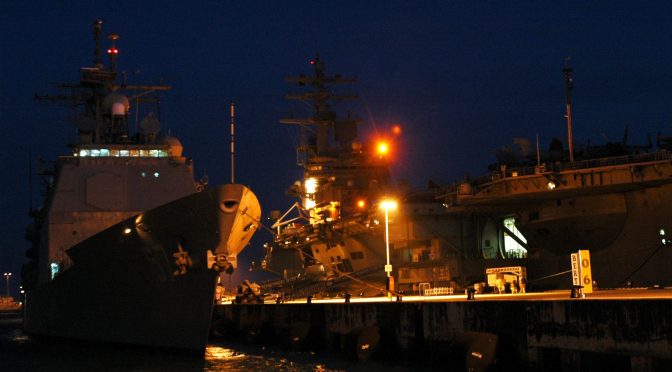 Last week CIMSEC featured articles submitted in response to our Call for Articles on Maritime Strategy for Great Power Competition. They covered a broad range of topics including hybrid warfare, the role of maritime power in grand strategy, and how great power competition is shaping naval competition. Below is a list of articles that featured during the topic week and we thank these authors for their contributions.

Countering Hybrid Threats in the Maritime Environment by Chris Kremidas-Courtney

“As we’ve seen recently, in both Crimea and the South China Sea, a hybrid approach lowers the political price for aggression, making regime change and territorial annexation possible “on the cheap.” Many refer to this phenomenon as “hybrid warfare” and in the process militarize a phenomenon that is actually much broader and more complex. This phenomenon requires a whole-of-government and whole-of-society approach to access the necessary means and authorities to address them. Thus, hybrid threats are best understood when framed as an attack on governance, specifically democratic governance.”

“Straight balancing imperatives against the U.S. bring Russia and China together. This was first evident in their 1997 ‘Joint Declaration on a Multipolar World and the Establishment of a New International Order,’ which was followed by a Treaty of Good-Neighborliness and Friendly Cooperation signed in 2001, and proclamation of a ‘strategic partnership.’ Joint military exercises were initiated in 2005, with maritime exercises starting in 2012. Their military cooperation has clear ‘geopolitical signaling’ to the U.S.-led order, reflecting their maritime strategies.”

What do the New National Security and Defense Strategies Mean for Maritime Security? by Jack McKechnie

“The NDS outlines the Department of Defense’s approach to implementing the President’s NSS. Both signify a significant change of focus while also confirming the traditional American approach to security. During the implementation of these strategies, the maritime environment plays a prominent role in addressing security concerns for the foreseeable future.”

Manning the Distant Rampart: Maritime Strategy in an Age of Global Competition by Harry Halem

“Eurasia’s narrow seas also include maritime chokepoints that constrain nearly all seaborne movement – controlling even one of these chokepoints gives the dominating power the ability to manipulate the global economy, and deny other powers secure lines of communication while facilitating the transfer of forces between theaters. Maritime strategy, therefore, is a significant part of American grand strategy, as Eurasia’s proximate maritime features and chokepoints have always been central areas of contestation in great power competition.”

The Discrepancy Between U.S. Administration Rhetoric and Navy Strategy by Philip Chr. Ulrich

“Here, the strategy is based on a long-term build-up of forces supplemented by plentiful cooperation with allies and partners – also through multilateral organizations and upholding international norms and rules of the liberal world order. The process to reach this strategy took more than a decade following the fall of the Soviet Union, only now to be met by an administration challenging the very order that this strategy sees as the very foundation of U.S. global power.”

“Given its open access to all comers, the sea has become a home of very many illegalities, a den of pirates, illegal bunkerers, crude oil thieves, smugglers, poachers, polluters, drug traffickers arms dealers, terrorists and other economic saboteurs. In view of the huge number and sophistication of these misusers of the sea, globally, navies are teaming up for maritime security protection, given their inbuilt scalable capabilities to deal with all eventualities.”