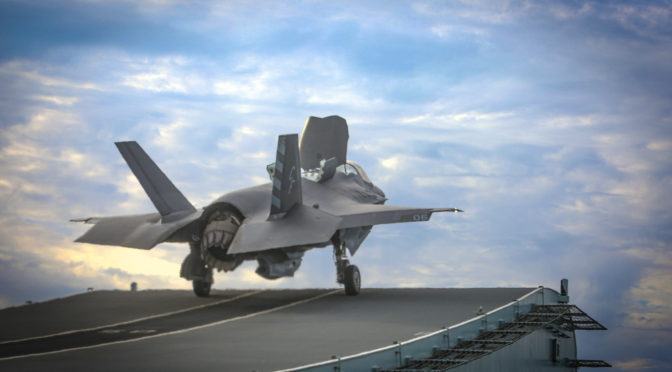 Four years ago, the U.S. Navy began talking seriously about future fleet design. Directives were released, forums were held, studies were commissioned, roadmaps were constructed, and long-range plans were drafted – each of which called for innovation at scale and reform at speed. Six Navy Secretaries, five Defense Secretaries, four federal budgets, three elections, two Congresses, and one Chief of Naval Operations later, the Office of the Secretary of Defense finally added its voice with Battle Force 2045.

Now it is time to stop talking about the fleet’s future and start building it. This is why.

Naval leaders have a way with words. Flag officers scrutinize them, commanders study them, selection boards interpret them, and staff officers labor over them. Hours of every Navy day are spent molding words into scrupulous emails, formulaic memos, transmittable orders, prosaic strategy documents, and immemorial PowerPoint slides. For better and worse, contemporary naval careers are about surfing words as much as making waves.

But as indispensable as they are to bureaucracy and stricture, most words are cheap, especially in the Pentagon. The shelf-life of a typical action memo or decision brief not required by a program of record or operational order is less than a year. With personnel tours rarely aligned to program requirements or project aims, it proves impossible for staff officer teams to aggregate, iterate, and advocate new ideas beyond the few overlapping months they have together.

The predominance of email and PowerPoint as standard communication mediums only makes matters worse. Once sent or briefed, the words they contain struggle to hold value amid torrents of other communications each day. Emails become guarded or siloed in personal inboxes. Slides, if saved, are uninterpretable once divorced from the briefer. And the obsession with brevity cultivated by both mediums dissuades the critical, memorable, and lengthy learning-based discourse rich topics deserve.

On some level, the Pentagon knows this, and so does the Navy. The antidote is often thought to be strategy. It is not.

When I reported to the Pentagon in 2016 for my final Navy orders, it was to a newly created “Office of Future Strategy.” Established by then-Chief of Naval Operations (CNO) Admiral John Richardson as part of his Design for Maintaining Maritime Superiority, we were a small team tasked with identifying vectors and markers to move the Navy from words to action on future fleet design. The result was an internal report, Future Fleet Design and Architecture for 2045, that set strategic design priorities and architectural attributes for a future fleet that closely match those endorsed by Defense Secretary Esper in recent weeks. That report was published three years ago.

What happened next highlights why strategy in today’s Navy is too fragile for hope. The admiral who signed the Future Fleet Design and Architecture for 2045 transferred within one week of its approval. The Office of Future Strategy lasted less than nine months beyond completion of the report. The CNO who sponsored it retired two years hence. And in the meantime, there were countless executive turnovers within the Navy staff directorates, program offices, and fleet commands on which its recommended reforms relied for execution and support.

Most of this was expected. Even in calm seas, the sprint of Navy flag officers through posts at the Pentagon, alongside the persistent tinker of senior Navy executives within service staff structures, can capsize a Navy strategy. What was unexpected was how rough the seas would become.

Adrift, roiled, crippled, struggling, unclear: each is a published descriptor of America’s naval leadership in the past three years of continuous turnover among appointed and acting Secretaries of Defense and Secretaries of the Navy, questionable fleet fires and firings, on-again off-again Navy approaches to education reform, Pentagon wrangling over naval force structure assessments, and unplanned changes in CNO accession.

It was a perfect storm to sink a fragile future fleet design. That any remnants of it survived is a testament to one thing: the future is here.

When words are cheap, strategy fragile, and the future now underway, there is only one path to enduring impact. The Navy needs to stop talking, writing, and strategizing for the future. It needs to start building it now, and it needs to build to last.

Whether the goal is 355 ships or 500 ships by 2045, those tasked to pursue it need to acknowledge that between today and mission completion stand 25 federal budgets, a dozen new Congresses, up to seven different Commanders-in-Chief, at least a half dozen CNOs, and a full generation of naval officer careers. What will it take to build a fleet to ply those waters?

First, the Navy needs to build a new Navy Staff structure (OPNAV) that biases the future over the present. This will no doubt incur risk to current operations, impact readiness, and be decried by advocates for fleet platforms that have served our nation well for decades. But a future fleet cannot be cast, shaped, and hardened from a naval staff structure built to focus on the present. The Navy needs requirements directorates, programs of record, and assessment directives aligned to future fleet goals rather than current fleet demands.

This can take several forms. OPNAV N8 and N9 can be rebuilt around future fleet mission-sets, cross-community force packages, integrated kill-chains, or networked decision loops. Which vector is chosen matters less than that it shatters stove-pipes and breaks the horizon.

Second, the Navy needs to build learning momentum. The standup of a new 3-star OPNAV N7 Directorate dedicated to warfighting concept development and education, along with the assignment of a former fleet commander to its helm, was a step in the right direction. VADM Franchetti’s nomination to move jobs less than two months after reporting was not helpful, however. Nor is the failure to replace the Navy’s Chief Learning Officer or mirror the Army Futures Command’s collaborative approach toward capability innovation that goes beyond strictly military sources of thinking. If the Navy is serious about growing into its future fleet, it needs to build leaders with tenure and partners to prove it, and staff structures whose missions can withstand rapid leadership turnover.

Third, the Navy needs to build a maritime manufacturing base for the future fleet. It is always tempting to assume that the U.S. industrial base is up to any task. But a plan to nearly double the number of hulls in the U.S. fleet and boost nuclear submarine construction by a third is no easy feat for a shipbuilding industry that has been in steady decline for several decades. There may be some solace that as ships turn autonomous, and thereby smaller, the number of private shipyards able to build and service them will expand. Yet there is less solace in the fact that autonomous ships like Sea Hunter have yet to be fielded beyond an experimental capacity, or built at scale for the weaponry needed in contested seas. There remains much to be studied on both sides of the public-private relationships that fuel U.S. sea power, and the only way to learn fast is to build and experiment fast.

Fourth, the Navy needs to build interoperability with future allied navies. Oliver Hazard Perry-class frigates, SM-3 missiles, AEGIS, MK 46/48 torpedoes, F/A-18 jets, H-60 helicopters – each is among the most enduring and cost-effective fleet platforms of recent decades. These platforms have also been popular acquisitions by U.S. allies as assurance that freedom of the seas and defense of our nations is a joint venture. This is no coincidence, as much of the U.S. Navy’s success in the Cold War and since has derived from the degree to which foreign navies were attracted to its standards. America’s is not the only allied Navy building up in NATO or sizing up future fleets in the Pacific. Combined, these forces already have over 500 blue water hulls. By 2045, they could produce over 1,000. But across international borders, tactical and technological futures should converge by design more than by chance.

Finally, the Navy needs to build civic enthusiasm for its mission and future. A 40 percent boost to the Navy’s annual shipbuilding budget is an audacious goal. The projected $27 billion shipbuilding budget request Defense Secretary Esper hinted at for 2022 is more than 40 percent what the executive branch requested for spending on education next year. That is a tall order in any year, but a towering one in a government struggling to redesign schools and reskill workforces for the digital and pandemic disruptions of our age.

As gratifying as it is to see defense leaders embrace the future fleet and the resourcing it requires, the stakeholders that really matter are the American taxpayers, voters, and representatives who must fund it. That will take a concerted effort to engage them as beneficiaries of its outcomes and missions. It will take educating and including their representatives on decisions about not just what is needed to build the fleet, but how and where it will be used and why. It may even take a bipartisan U.S. Maritime Commission, akin to the one launched in 1936, to tend to the public will of a maritime nation in distress.

All of this is to say that it is time for the Navy to stop relegating the future to words. Building the fleet of 2045 needs to become a top priority for 2020. There are not another three years, or even three months, to lose.

Frank T. Goertner, a retired U.S. Navy commander, is director for military/veteran affairs and national security programs at the University of Maryland’s Robert H. Smith School of Business. His final uniformed contribution to the Navy was as lead author of a 2017 report on Future Fleet Design and Architecture for 2045. The opinions expressed here are his alone.