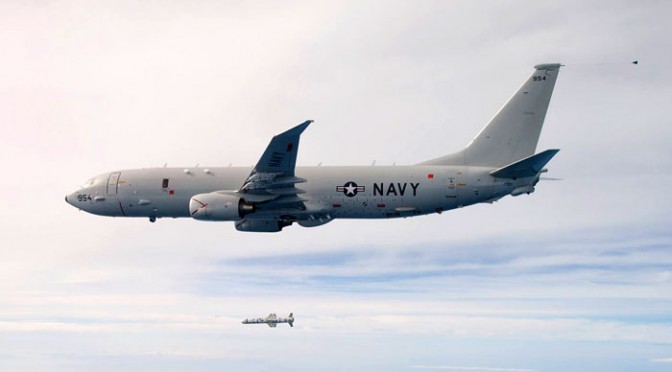 Recent months have found uniformed officers and naval strategists writing and speaking about regaining the ability of U.S. Navy (USN) ships to conduct offensive anti-surface warfare (ASuW). The discussion has been lively and featured many authors and many different approaches. Some solutions are incremental, such as fielding more capable long-range weapons in existing launch systems.[i] Others are more radical, such as trading large long-range missile defense interceptors for small point defense missiles and building a new generation of multi-role cruise missiles.[ii]

Missing from the discussion of future acquisitions and new weapons is how the USN can leverage existing land-based airpower to seize the offensive in ASuW. The P-8 Poseidon maritime patrol aircraft is deployed today, with the range, persistence, sensors, and network architecture to serve as a self-contained “kill chain.” It is able to disperse and operate in an expeditionary environment during peacetime or contingency operations. If equipped with more suitable long-range anti-ship weapons, this aircraft will provide greatly increased capability for the combatant commander. This will allow more flexibility for USN forces to operate in an A2/AD environment when a carrier is not nearby or in the interim until more capable surface-based ASuW weapons are fielded.

During the last three decades, the USN has divested its surface forces of offensive anti-ship firepower as operations shifted to littoral environments with permissive threat profiles. With the retirement of the Tomahawk Anti-Ship Missile, the service has been left without a weapon that can engage targets at a range beyond that of threat anti-ship cruise missiles (ASCM’s).[iii] Our ships now go to sea armed only with the sub-sonic, medium range Harpoon missile. The removal of Harpoon from Flight IIA DDG-51’s after DDG-79 and proposed cuts to funding for cruisers have exacerbated this glaring deficiency.[iv] The onus for conducting maritime strike has shifted from our surface ships to the aircraft of the Carrier Strike Group (CSG).

As the reach and number of U.S. ASCM’s have decreased, threat systems have proliferated and improved in range, speed and sophistication. China, Russia, and India all possess advanced supersonic long-range ASCM’s. Foreign militaries are equipping themselves not only with the weapons needed to strike, but also the C4ISR capabilities needed to detect and accurately target adversary forces.[v]

Commanders, legislators, and the defense industry have responded with a variety of initiatives, including the development of an Offensive Anti-Surface Weapon (OASuW.) This program is aimed at fielding an advanced cruise missile with sufficient range to allow USN ships to employ outside the reach of threat weapons systems. OASuW Increment 1 will begin fielding the Lockheed Martin Long Range Anti-Ship Missile (LRASM) in FY17 for carriage on the F/A-18 Super Hornet and USAF B-1 bombers. OASuW Increment 2 will provide for integration of a long-range anti-surface capability onboard surface ships.[vi] By equipping the F/A-18 and B-1 with the ability to carry LRASM, the Department of Defense has signaled that regardless of eventual integration of OASuW onboard surface ships, carrier and land-based airpower will remain a key component of the U.S. anti-surface strategy.

Missing from this conversation on OASuW capabilities is the USN’s Maritime Patrol and Reconnaissance (MPR) force. The MPR community is recapitalizing with the P-8 Poseidon aircraft. The sensors, datalink capabilities, and expeditionary nature of this aircraft make it a natural choice to augment the lack of anti-surface punch. The P-8 and RQ-4C UAS are envisioned to play targeting roles in long-range ASuW engagements, so arming P-8 with upgraded weapons is a logical next step. The Poseidon can allow the fleet to seize the initiative in anti-surface employment, especially in situations where the threat makes the reality of deploying the CSG forward politically unpalatable or disadvantageous.

The P-8 Poseidon is derived from the Boeing 737 aircraft. It features long-range, high transit speed, solid persistence, and will soon incorporate the ability to perform air-to-air refueling. The open architecture mission systems are easily reconfigurable and allow for rapid improvement of sensor and weapon capabilities. The P-8 features a Mobile Tactical Operations Center (MTOC), which aids in processing data collected during and after mission flights. The MTOC is fully expeditionary, allowing an MPR detachment to quickly relocate in peacetime or disperse away from main operating airfields and continue to fight in wartime.

The ability to disperse is especially critical in an A2/AD environment. The proliferation of theater ballistic missiles (TBM’s) and cruise missiles has allowed previously weak nations to hold an opponent’s forward bases at risk. By deploying aircraft to auxiliary fields away from large military installations, adversary commanders are faced with a much more challenging targeting problem. The increased cost of building more TBM’s may be daunting to a particular military, and the uncertainty of being able to destroy forward forces is a stabilizing influence. P-8’s ability to deploy to medium sized airfields and sustain itself during combat operations is a force multiplier.

In short, P-8 offers a weapons platform that is uniquely suited to maritime strikes. Its crews are far more familiar with operating in the ASuW role than USAF bomber crews and culturally more pre-disposed to emphasize this mission set. The ability to act as an armed sensor platform allows the Poseidon to close the kill-chain itself. P-8 armed with suitable standoff weapons has the ability to detect and attrite adversary surface ships, preserving the ability for our surface forces to deploy forward in wartime, and decreasing the need for our carriers to surge forward into extremely high-risk areas to eliminate surface threats with the air wing. This provides increased flexibility to the combatant commander.

The MPR force has the potential to act as a powerful ASuW strike force, however this capability can grow stronger with upgrades and training. P-8 should be equipped with an OASuW capability, ideally allowing it to carry the LRASM rounds that will enter production in FY17. The largest roadblock will not be carriage capability or weapons system engineering, rather finding the funding to provide integration and testing for this weapon onboard P-8.

The P-8 currently carries the Harpoon Block IC, which is insufficient for high-end ASuW. The Block IC is not net-enabled, meaning it cannot receive in-flight updates from targeting platforms via a datalink. This makes the weapon less flexible and precise in congested environments. The aircraft is slated to receive the Harpoon Block II, which is net-enabled, but is still constrained by its short range.[ix] This lack of reach prevents it from engaging high-end air defense warships without putting the P-8 and its crew at serious risk.

It is best to utilize the synergy that exists in MPR squadrons and equip these aircraft with both the sensors and the weapons required for standoff targeting and strike. Since AAS equipped P-8’s may be required to provide targeting support to OASuW in a complex surface environment, equipping the targeting aircraft with weapons is the logical next step to close the kill chain. Once P-8 is equipped with LRASM, crews must be required to train frequently with AAS equipped targeting aircraft and LRASM equipped shooter aircraft against representative threat pictures. Maritime targeting is a very dynamic and challenging game, and requires practice to execute properly.[x]

Equipping the MPR force with a long-range strike capability will capitalize on existing sensors, platforms, and aircrew skills. The ability to call on an existing force structure with incremental upgrades provides a solution to a glaring deficiency in the Navy’s ASuW capabilities. The ability to task highly mobile aircraft rather than SSN’s or carriers to provide ASuW firepower provides a commander with increased options and flexibility. This can reduce risk while raising the enemy’s uncertainty about U.S. operational intentions.

American patrol crews gained fame during World War II for their nighttime raids on Japanese shipping. Operating alone and independent of the carrier they provided a critical force to weaken enemy logistics capability and to disrupt sea lines of control. It is fitting that almost three quarters of a century later we consider the role of our current MPR force. The P-8 can add to our ASuW capability if we make the decision now to properly equip it and provide training to aircrews.

Lieutenant Michael Glynn is an active-duty naval aviator and graduate of the University of Pennsylvania. He most recently served as a P-8 instructor pilot and mission commander with Patrol Squadron (VP) 16. He currently serves as an instructor flying the T-45 with the ‘Fighting Redhawks’ of Training Squadron (VT) 21. The views expressed in this article are entirely his own.

[x] Maksim Y. Tokarev, “Kamikazes: The Soviet Legacy,” Naval War College Review, vol. 67, no. 1, (Winter 2014), 61-84. It should be noted that Soviet Tu-95RT “Bear-D” reconnaissance and targeting aircraft were equipped with Uspekh-1 “Big Bulge” maritime search and targeting radar. This system did not feature Inverse Synthetic Aperture Radar (ISAR) capabilities for standoff imaging and identification. The P-8 AAS system and APY-10 search radar both feature ISAR capabilities, simplifying long-range identification challenges. Modern employment scenarios would find ISR aircraft much better able to identify a contact once it had been located and would not be as chaotic as the Soviet experience that Tokarev describes. Maritime targeting still remains an arena that is inherently dynamic and therefore requires proper training to execute reliably and efficiently.