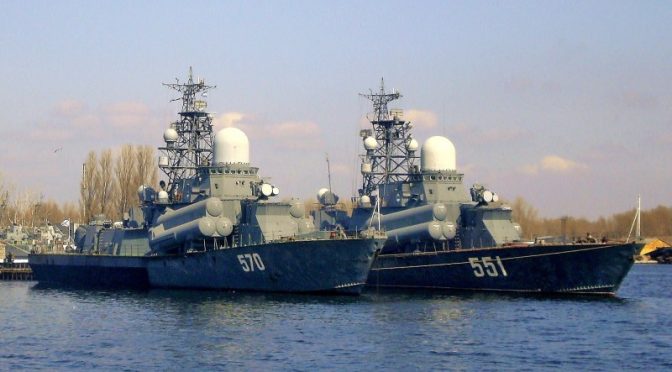 The past months have seen a significant increase in Russian military activity across Europe, including the Baltic Sea. Last month, Admiral Michelle Howard, commander of U.S. Naval Forces Europe and Africa, and commander of NATO’s Allied Joint Force Command Naples, described the scope of Russian military activity in Europe as “precedential,” exceeding even Cold War era levels.1 The Baltic Sea, in particular, has become increasingly congested with Russian military forces operating in the region, leading to tense encounters in the air and on the water. Most notably, last April, two Russian Sukhoi SU-24 attack aircraft made repeated low-altitude passes over the USS Donald Cook, a guided missile destroyer operating in international waters in the Baltic, with several of the passes resembling “simulated attack” runs.2 Russia also recently deployed Iskander missiles, a “nuclear-capable” system with a range of over 400 miles, to Kaliningrad, the Russian enclave situated between Poland and Lithuania,3 and, last month, conducted cruise missile drills in the Baltic Sea.4 This summer, Russia is expected to conduct its “Zapad” (or “West”) Exercise in Kaliningrad and Belarus, with estimated Russian participation numbering between 70,000 and 100,000 troops.5 Some of these incidents are alarming in and of themselves; others, though seemingly routine, may be cause for concern when viewed in light of other regional Russian military activity. Context matters.

The most recent Russian military activity to draw attention in the region was the transit of three Russian warships through the Exclusive Economic Zone (EEZ) of Latvia, a NATO member state.6 The three warships—the  corvettes Liven 551, Serpukhov 603 and Morshansk 824—were sighted four miles outside Latvia’s territorial sea, or sixteen miles from the Latvian coast. The warships were scheduled to participate in a naval parade to commemorate “Victory Day,” celebrating the end of World War II, but were redeployed prior to the parade, quite possibly in response to the destroyer USS Carney’s arrival into the Baltic Sea.7

In isolation, the transit of the Russian vessels through the Latvian exclusive economic zone is relatively benign. In the context of Russia’s military activity in the Baltic over the past year, however, the transit can appropriately be described as “aggressive,” even “confrontational.” That said, the transit was not unlawful under international law, and this point cannot be lost in the discussion. The United States and its allies rely on the navigational freedoms protected under international law as much as the Russians, arguably more so. Promoting these freedoms is essential to ensure U.S. maritime mobility.

Under international law, coastal state sovereignty ends at the outer limit of the territorial sea and the airspace above it,8 and even this sovereignty is subject to certain navigational rights, such as the rights of “innocent passage” and “transit passage.”9 Vessels and aircraft, to include military vessels and aircraft, operating seaward of a state’s territorial sea enjoy the freedoms of navigation and overflight and other internationally lawful uses of the sea related to those freedoms.10 The U.S. position is that for military vessels, this freedom of navigation includes being able to conduct certain military activities in a state’s EEZ, such as military maneuvers, flight operations, military exercises, surveillance and intelligence gathering, and weapons testing and firing.11

Not all nations share the U.S. view on the scope of permissible military activities in the EEZ, and instead advocate a legally and practicably untenable interpretation. This interpretation is based, in part, on an incorrect reading of Article 88 of the UN Convention on the Law of the Sea (UNCLOS), which applies in the EEZ through Article 58(2).  This Article states that the high seas shall be reserved “for peaceful purposes.”12 The “peaceful purposes” language in UNCLOS, however, does not prohibit military activities in the EEZ, only those activities inconsistent with Article 2(4) of the UN Charter.13 Nevertheless, even under a restrictive interpretation, warships transiting through a coastal state’s EEZ—even with the intent to locate and surveil a foreign warship on the high seas—would still be permissible under international law. In fact, had the three Russian warships been transiting through the Latvian territorial sea (within twelve nautical miles of the coast), and even done so unannounced, this too would have been permissible under international law, so long as the vessels were properly exercising their navigational right of “innocent passage.”14

Military activities, both planned and unplanned, will continue to be conducted in the Baltic, by both Russia and NATO and its allies, for the foreseeable future. That is not a criticism; it is a statement of fact. While it is certainly appropriate—strategically critical even—to criticize and protest unwelcome, aggressive and confrontational military acts, care must be taken not to mischaracterize the lawfulness of the acts under international law, either directly or by implication. To be optimally effective in the Baltic region, NATO forces, to include those of the United States, will rely on the freedoms of navigation and overflight preserved under the law of the sea. The lawful exercise of those freedoms, particularly as it relates to military activities, must be preserved, even when their application is unpopular.

Commander Sean Fahey, United States Coast Guard, is currently assigned as the Associate Director for the Law of Maritime Operations at the Stockton Center for the Study of International Law at the U.S Naval War College in Newport, Rhode Island. He is also the Editor-in-Chief of International Law Studies. He can be reached at Sean.Fahey@usnwc.edu.

The views and opinions expressed here are presented in a personal and unofficial capacity. They are not to be construed as official policy or reflecting the views of the United States Coast Guard or any other U.S. government agency.

8. United Nations Convention on the Law of the Sea, Dec. 10, 1982, 1833 U.N.T.S. 397, arts. 2-5. (Article 2(1) reads: “The sovereignty of a coastal State extends, beyond its land territory and internal waters…to an adjacent belt of sea, described as the territorial sea.” Article 2(1) reads: “This sovereignty extends to the air space above the territorial sea as well as to its bed and subsoil.”) Every State has the right to establish the breadth of its territorial sea up to twelve nautical miles from its baseline, normally the low-water line along its coast. (arts. 3-5).

13. Kraska, supra note 12, at 884-85. Article 2(4) of the UN Charter reads: “All Members shall refrain in their international relations from the threat or use of force against the territorial integrity or political independence of any state, or in any other manner inconsistent with the Purposes of the United Nations.” http://www.un.org/en/sections/un-charter/chapter-i/ .