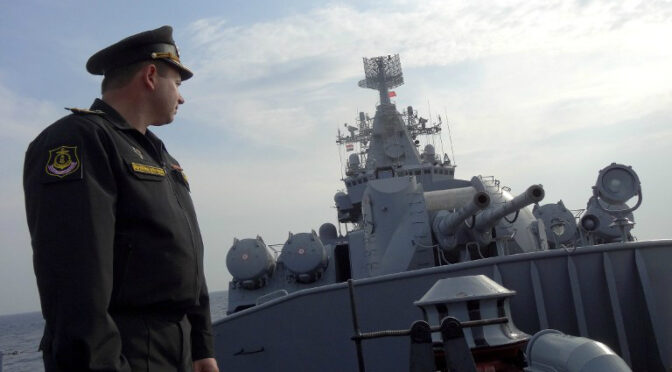 In recent years, and significantly since the 2011 Syrian uprising, the Russian Navy’s presence in the Eastern Mediterranean and Syria has expanded dramatically. The increasing Russian presence in Syria is part of Russia’s updated naval doctrine, which was first published in 2012, and revised in July 2016. This doctrine was called the Revised Russian Naval Doctrine up to 2030.

As in the case of previous strategic doctrines, it defines the navy’s role as part of Russia’s security policy, its goals, its main directions for the buildup of naval forces, and the geographic areas of naval operations. The doctrine also includes and specifies an assessment of threats to Russian maritime security up to 2030.

The doctrine states that the maritime domain’s main threat originates from the U.S. and NATO forces, which endeavor to dominate the ocean and achieve absolute superiority at sea. It also states that the Russian Navy must be ready to deal with technologically advanced adversarial navies, which are equipped with high-precision weaponry and missiles, and that Russia must strive for a situation in which its navy remains in second place regarding warfare capability.

This aspiration expresses the Russian understanding that the U.S. Navy is the most advanced globally and that Russia does not intend to build a navy similar in size or quality.

The new doctrine relates in a general way to the need for operational capability in all regions and ensuring the ability to maintain Russian naval forces’ long-term presence in strategically critical maritime arenas. It explicitly emphasizes the strategic importance, from the Russian government’s perspective, of naval presence in the Black Sea, the Mediterranean, and the Arctic.

The reduction of the U.S. naval presence in the region results from a strategic decision made by the two U.S. presidents to transfer the bulk of its naval forces to Asia to view China and North Korea’s growing threat.

The primary objective of Russia’s increased involvement in the region is to reposition itself as a world power. Through its focused and determined intervention in Syria, Russia demonstrated that it is a key player whose involvement is essential to resolving international issues. For more than four years, the West, which had failed to resolve a steadily exacerbating problem in Syria, was now forced to consider the Russian positions even more carefully and involve Moscow in resolving the crisis.1

The second objective of Russia’s involvement was to leverage the Syrian issue to resolve problems in other areas vital to it, mainly Europe in general and Ukraine in particular. Russian involvement in Syria intended to pressure the West to remove the sanctions imposed by the United States and Europe following Russian operations in Ukraine.2

The Russian naval presence in Syria is one of the significant ways in which Russia implements its maritime strategy. In practice, the implementation of the Russian maritime strategy in the Mediterranean is manifested in the expansion and upgrade of the Russian naval port at Tartus, the deployment of strategic weapon systems along the Syrian coast, such as the advanced S-300 and PANTSIR (SA-22) air defense systems, the SS-N-26 Yakhont shore-to-sea anti-ship missile systems, SS-26 Iskander short-range ballistic missile, long-range detection systems, and advanced electronic warfare systems.

The reinforced presence of Russian military forces in the Mediterranean and particularly in Cyprus and Syria also include the deployment of corvettes, submarines (equipped with Kalibr cruise missiles), fighter aircraft squadrons, and helicopters.

The Russian aircraft squadrons, which are deployed at the Khmeimim base near Tartus’ port, are intended to provide an air ‘umbrella’ to the Russian Navy operating in the Mediterranean.

In January 2017, Russia signed an agreement with the Syrian regime to lease a naval base within the Tartus port and the Khmeimim airport for 49 years with automatic renewal for another 25 years. Russia began constructing the port and its expansion to station 10 to 20 ships there and to provide maintenance capability. As part of the agreement, the defense of the base from sea and air attack is under Russian responsibility, while its physical protection on land in Syria’s commitment.

The Russian maritime strategy’s implementation can be seen in the prolonged campaign in Syria, during which the Russian Black Sea Fleet demonstrated an intensive presence in the arena. The Black Sea Fleet performed patrols and was also responsible for supplying weapons systems and munitions from Russia to Syria using supply and auxiliary ships, which brought cargo from its base in the Black Sea to Tartus.

Furthermore, during 2016-17 the Russian Navy carried out several attacks on high-quality ground targets in Syria using submarines and surface vessels firing cruise missiles from the Mediterranean, the Black Sea, and the Caspian Sea.

In this context, it is worth mentioning the demonstration of power by the Russian aircraft carrier Admiral Kuznetsov in the Mediterranean and notably opposite the Syrian coast from November 2016 until late January 2017. The aircraft carrier, which was accompanied by a large task force (and perhaps even a submarine), was the platform from which attack aircraft took off for missions in Syria.

The Russian Navy’s presence in Syria enables Russian strategic and critical capabilities such as power projection with an air-defense umbrella, logistics basing for operations in the region, and securing oil transportation from Iraq or Syria to Russia.

First, Russian intelligence gathering on Israeli naval activity affects the freedom of executing routine secret operations and will also affect the ability to perform them in crisis times. The intelligence gathered enables the Russians to build a maritime picture and evaluate the Israeli Navy’s routine operational activity (from this, it can also identify any non-routine activity it carries out).

It can be assessed with high probability that intelligence gathered by the Russian Navy is also conveyed to Syrian and Iranian troops and indirectly even to the Hezbollah terror organization.

Second, the presence of Russian vessels not only threatens the secrecy of Israeli navy operations in the arena but also exposes its ships to Russian forces (including Russian Navy firepower). This causes an inability for the Israeli Navy to maneuver freely in the arena where Russian vessels are present without prior coordination (deconfliction).

The threat to the secrecy of Israeli naval operations will make it difficult to carry out intelligence missions and special operations both in peace and in war. In addition, it is reasonable to assume that in the case of war or conflict, the Israeli Navy will be highly challenged in attacking its adversaries’ vessels and coastal targets (both in Lebanon and in Syria) by the presence of Russian Navy vessels and aircraft.

Eyal Pinko served in the Israeli Navy for 23 years in operational, technological, and intelligence duties. He served for almost five more years as the head of the division at the prime minister’s office. He holds Israel’s Security Award, Prime Minister’s Decoration of Excellence, DDR&D Decoration of Excellence, and IDF Commander in Chief Decoration of Excellence. Eyal was a senior consultant at the Israeli National Cyber Directorate. He holds a bachelor’s degree with honor in Electronics Engineering and master’s degrees with honor in International Relationships, Management, and Organizational Development. Eyal holds a Ph.D. degree from Bar-Ilan University (Defense and Security Studies).

Featured Image: Russian Navy Captain Alexander Shvarts stands near the main gun system on the Russian missile cruiser Moskva as it patrols in the Mediterranean Sea, off the coast of Syria, on December 17, 2015. (Max Delany/AFP)