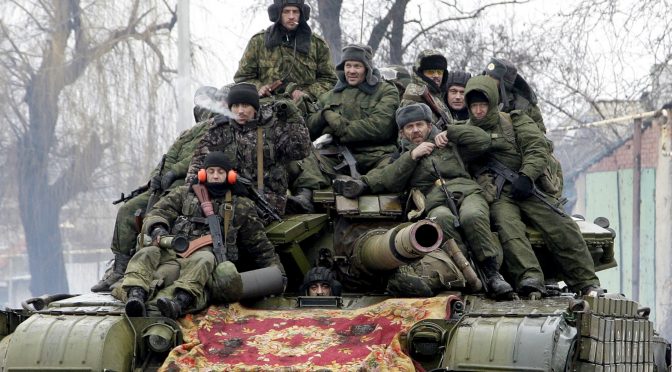 The Danger of a Declining Power: Reckless Courage in the Face of Oblivion

It seems as if a day does not pass without seeing a news article analyzing the relations between the United States and Russia. It remains undisputed that Vladimir Putin has successfully solidified his position of leadership amidst the Russian hierarchy, and the world waits in wonder of what he may do next. The troubling, and occasionally overlooked, variable of this situation is that Putin is not commanding a thriving nation. Rather, Russia has experienced considerable decline in terms of market economics since the collapse of the Soviet Union, losing global power and failing to compete with the torchbearers of globalization. Thus, it is evident that Russia is not an emerging power in the global landscape, and furthermore, it is safe to assert that they are not ‘reawakening’ under any conditions. Instead, amidst their decline (or possibly even within the monotony of stability via mediocrity), the United States must be cautious of the dangers posed by a disruptive nation that acts like it has nothing to lose. Let us begin by debunking the notion that Russia is an emerging power before moving on to analyze the dangers associated with declining powers.

The National Intelligence Council’s Global Trends 2030 predicts the misfortune of Russia. The report proposes in relation to Russia’s economy that it is “likely to continue [its] slow relative decline.”1 The report continues, “[A] Russia which fails to build a more diversified economy and more liberal domestic order could increasingly pose a regional and global threat.”2 The threat here would be exhibited in the form of trying to obtain resources and other market shares from neighboring countries, conflicts that may extend so far as to provoke NATO. Russia, for so long, has relied upon the oil industry to fuel its economy, failing to diversify fully into other areas within the market economy. By failing to fully embrace the liberal order of modern markets, Russia has not achieved the success of its counterparts. With the prices of crude oil currently dropping to just under $50 per barrel, it looks as if the Russian economy is far from sustainable, especially considering it is pillared on a resource that is subject to exhaustion.3

In his article, “The Illusion of Geopolitics,” G. John Ikenberry categorizes Russia as a “part time spoiler,” citing that they are not worthy of the title of “revisionist power.”4 In this context, revisionist powers are understood to be emerging authorities that seek the throne of global hegemon. These authorities would seek to abolish/revise the pluralistic, democratic, and capitalistic practices that have been established in many nations throughout the world under the tutelage of the United States—going as far to usurp the U.S. from its seat as global hegemon. Russia, according to Ikenberry in his response to Walter Russell Mead, is clearly not a revisionist power, deducing this from observing Russia’s willingness to maintain its status amongst the global institutions (i.e. the UN Security Council, IMF, World Bank, etc.). Moreover, Ikenberry notes that Russia’s stance on international relations is “mainly about the search for commerce and resources, the protection of their sovereignty, and, where possible, regional domination,” and continues, “[t]hey have shown no interest in building their own orders or even taking full responsibility for the current one and have offered no alternative visions of global economic or political progress.”5 Thus, Russia recognizes the importance of the global market system and the role that it plays in its success. Beyond trade, though, is a concern for geopolitics, preventing Russia from expanding their order to contend for global supremacy.

I believe that Ikenberry’s analysis of Russian prioritization in modernity hits the mark, but his overall optimism of the United States’ position having a certain degree of permanency is poorly founded. In attempting to solidify the position of the United States atop the global ladder, Ikenberry fails to adequately account for geopolitics as he attempts to undermine the importance of geopolitics by conceding its existence as negligible. It is on this point that I must agree with Mead in part, as geopolitics would appear to play a considerable role in global power dynamics—but, that is not to say that engaging in geopolitics warrants a position equitable to a revisionist power. Over the past several years in Crimea and South Ossetia, we have seen Russia take holdings in Ukraine and Georgia, land that was once part of the Soviet Union. This behavior, though, is not an attempt at the building of a new order. It appears to be an effort to disrupt democratic political institutions that have been established to respond to such situations. One must wonder: is this Russia’s advance at cementing their power on the global scale or is it an exhibition of a dying country that is so desperately trying to stay relevant?

If we were to accept the former, in that Russia was trying to cement its power, we would be accepting the argument of John Mearsheimer. Richard Betts weighed in on the topic, channeling Mearsheimer when he advances, “Bucking the tide of optimism, [Mearsheimer] argued that international life would continue to be brutal competition for power it had always been…[his] vision is especially telling because it is an extreme version of realism that does not see any benign actors in the system and assumes that all great powers seek hegemony: ‘There are no status quo powers…save for the occasional hegemon that wants to maintain its dominating position.”6 But does this viewpoint encapsulate the current state under which Russia operates? I am certain that Russia yearns to be the global hegemon, but all of the evidence that we have reviewed thus far suggests that they could not be farther from actualizing that goal.

Russia, even with their antics over the course of the past ten years, has been unable to disrupt the fabric of humanity. Instead, they have elected to directly challenge democratic institutions in Europe and the United States. Alas, it seems as if we have reached the pinnacle of our dilemma, and we can identify it as a continuance of a problem outlined by George Kennan during the Cold War. Kennan posits the necessary response, “it will be clearly seen that the Soviet pressure against the free institutions of the western world is something that can be contained by the adroit and vigilant application of counter-force at a series of constantly shifting geographical and political points, corresponding to the shifts and maneuvers of Soviet policy, but which cannot be charmed or talked out of existence.”7 It appears as if Russia, even in its decrepit post-USSR state, is trying to apply pressure against the free institutions of the western world. Kennan had advocated for a response that is economic and political to such disruption, as a military conflict with Russia will yield no winners—and most likely a world of losers. If the United States responds to Russia’s disruption militarily, then we may truly have a discussion about the ‘reawakening’ of the Bear.

Ultimately, we settle upon the realization that we must recognize our differences with Russia in terms of ideals, values, and institutions–transcending beyond the traditional military disputes that marked the history of our relationship until the finale of the Cold War. To say that Russia is reemerging into the global political scene as a contender for the position of global hegemon appears to be entirely fallacious. For Russia, their economy and the diversity of their resources point toward an overall declination in global power. Let it be clear, though, that reemergence is not a necessary condition of danger. As we tread into the future, we must account for Russia’s incessant desire to maintain its standing near the top of the global battleground. If Russia does, in fact, face impending oblivion, the United States must remain cautious to falling into the traps of reckless courage exuded by the falling Bear.

Jared Russel is a junior from Colorado College majoring in political science and philosophy and will be graduating in 2018.

4. G. John Ikenberry, “The Illusion of Geopolitics: The Enduring Power of the Liberal Order, “ in Foreign Affairs: The New Global Context, 2015, 16.

5. G. John Ikenberry, “The Illusion of Geopolitics: The Enduring Power of the Liberal Order,” in Foreign Affairs: The New Global Context, 2015, 24.

Ikenberry, G. John. “The Illusion of Geopolitics: The Enduring Power of the Liberal Order. “ In

Featured Image: Members of the armed forces of the separatist self-proclaimed Donetsk People’s Republic drive a tank on the outskirts of Donetsk, Ukraine, in this January 22, 2015 file photo. (Reuters/Alexander Ermochenko)