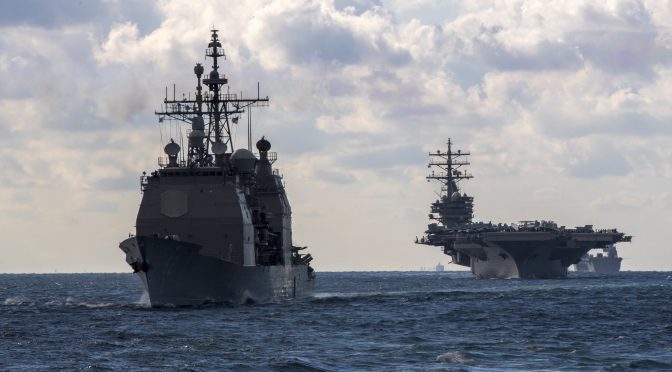 CRUDES SWATT exercises are unique in that they provide a dedicated advanced tactical training period for surface combatants and their crews to focus on sea control and maritime warfare before integrating with other elements of the strike group.

Could you describe the structure of the event as far as what happens in those several weeks?

JC: SWATT provides warships and warfare commanders advanced tactical training at sea designed to raise the combat capability they provide the nation as integrated elements of a Naval Task Group. SWATT builds on the work those warships and warfare commanders conduct during the basic phase portion of the combat readiness generation cycle and positions them to move into the final phases of training prior to deployment.

First, the teams develop plans for each of the events throughout the exercise for the training audience. Second, the training audience teams work together to brief the plan to their teams before executing the event, and to ensure that the manning, resources, and capabilities are in place to execute the event as planned. After that is complete, the team executes the event with SMWDC senior mentors and WTIs actively engaged in mentorship of the training audience during the exercise. At the end of each event, the teams leverage the talent and expertise of the technical community to reconstruct the days’ events, creating a “replay” of the day that enables a review of the team’s performance, and to determine where improvement can be made in the next training event of the exercise.

While teams are initially reticent to participate in this process because it takes a significant upfront investment in time, this changes as they go through the PBED experience. The investment of time to plan and to debrief requires a significant behavioral shift at both the warship and warfare commander levels. However, as the warfighters experience improved combat performance they become actively engaged in the process, grow a great deal, and leave SWATT with an ability to be much more objective about their own performances. This objectivity leads to higher levels of combat power and increases the commander’s ability to measure the degradation of combat power over time. This is exactly what the strategic environment mandates for us to face our competitors.

How do the scenarios become progressively more complex throughout the event, and how much of the training could be described as mostly free-play and open-ended?

JC: The events become more challenging throughout the exercise, and it is inspiring to watch the growth of teams throughout. The key is for leadership at all levels to be engaged throughout the process from the warfare commander on down to the lowest levels. These are the teams we see make the greatest gains throughout training. SWATT exercises are an essential element of our ability to turn readiness and capability into combat power.

Does SWATT take the form of a certification event or is it different in nature?

JC: This is a great question! Warships that participate in SWATT have basic requirements they need to meet in order participate in SWATT. However, SWATT is not a certification event. It is a learning and training environment for warfare commanders and warships. While we implement the planning, briefing, executing, and debriefing processes, humility and team growth is at the center of the exercise. We cannot grow if we aren’t hard on ourselves, and removing a “certification” element to the exercise allows us to best achieve the highest levels of learning.

How do you handle failure, and how is the learning experience different for a crew that fails versus one that succeeds?

JC: It is important that we take the word failure out of the mix when we talk about SWATT.

The way we handle growth, errors, and misjudgment in SWATT is with honesty and humility. Humility is the touchstone of growth in the process, and if we cannot be honest with ourselves in a training environment, then we certainly aren’t going to be honest with ourselves and our performance in theater during routine operations or in a combat scenario. It’s a bit cliché, but we don’t rise to our aspirations in war – we fall to our lowest levels of training. That’s why we do SWATT.

From SMWDC’s perspective, the difference between teams that learn and grow to their maximum potential during SWATT are those that are totally engaged and those that simply go through the paces. It’s fairly straightforward – those that take it seriously learn and grow as warfighters. Those that don’t will still learn, but just not as much.

The tremendous value in this is that teams and leaders who learn to be truly humble through this process, and those that take advantage of the learning tools that we provide, do become self-starters when it comes to learning. That is the goal of this process. We also see similar results on ships that have Warfare Tactics Instructors (WTI) as part of their teams when they complete their production tours. They harness the value of the principle and process and move out with a purpose.

Is there a way for Sailors to view the results of previous SWATT exercises and learn from the experiences of other Sailors?

JC: Absolutely. Before SWATTs, our planners work with the teams that will be the next participants to bring them up to speed on observations on the most recent SWATTs to help them optimize the training experience.

Further, there is an opportunity for the Fleet to stay engaged by staying up to date with the latest doctrine and tactics, techniques, and procedures (TTP) through the SMWDC online collaboration portal. Additionally, they can stay engaged by providing observations and lessons learned from their own experiences into the Tactical Observations Lessons Learned (TOLL) portal which provides a venue for the Fleet to ensure that what is happening at the tactical level enters the broader Surface Fleet’s consciousness and future iterations of TTP.

How can the training audience remain connected to tactical development and continue to follow what SMWDC is doing?

JC: I encourage surface warfare junior officers to learn about the Warfare Tactics Instructor (WTI) program and apply. WTIs are tactical subject matter experts and increase the proficiency, lethality, and warfighting capabilities of the Surface Force.

By becoming a WTI they earn greater-than-normal tactical classroom training followed by a production tour where they support SMWDC’s lines of operation – including advanced tactical training – throughout the Fleet. Additionally, they become a part of the cadre of WTIs that comes together once a year for a Re-Blue event where they re-baseline tactical expertise within their specific warfare area – Anti-Submarine Warfare/Surface Warfare (ASW/SUW), Amphibious Warfare (AMW), Integrated Air and Missile Defense (IAMD), or Mine Warfare (MIW).

This is by far the most effective way to stay actively engaged in the process. Of course, keeping an eye on message traffic, tactical bulletins, tactical memoranda, and other warfighting updates is an excellent way to stay up-to-date, though becoming a WTI is the number one choice for tactically-minded junior officers who want to be tactically engaged and strategically relevant.

What was it like to go head-to-head against other ships in the more complex, multi-mission area scenarios?

GM: Having SWATT built into the schedule is a perfect opportunity for us to come together as warship COs and warfare commanders to develop our unit and warfare area expertise and tactical proficiency. This process is similar in some ways to what the aviation community does in Fallon during their training cycle, and we’re excited to have a similar opportunity.

It is also very helpful to have a command that is dedicated to warfighting development in the Surface Community, and that provides alignment regardless of where Fleet ships operate. While our assigned mission sets may be different when we chop into theater, the tactical skills needed by each ship to execute effectively in a contested environment don’t change too much. It’s all about how you use those tactics to your competitive advantage.

What was it like to go through the WTI-led Plan, Brief, Execute, Debrief (PBED) process, and how is this an evolution in reflecting on a training experience?

GM: There hasn’t been anything specifically like this in our community since I’ve been in, and to see how far we’ve come since the WDCs were established a few years ago is really incredible. The support of the technical community and their integration with SMWDC to ensure that we have rapid, ground truth feedback is exceptional, and allows our teams to learn and grow rapidly.

Let’s be honest. Nobody likes to do something wrong. And certainly, nobody likes to be told that they could do something better. But what we do like is being good warfighters and an important part of our nation’s defense and warfighting team. Unfortunately, you can’t do one without the other. You absolutely have to eat your vegetables, you have to do your homework, and you have to do your pushups. That’s what SWATT is. It isn’t about getting it perfect, it’s about learning.

As a leader, that’s perhaps my biggest challenge, to get my team ready and in the mindset that this isn’t a test – we’re here to make mistakes and grow. That isn’t always the case when we do certifications and other events, but it’s a critical leadership challenge for ship COs to sort through.

I’m very proud of our team and what we’ve accomplished, and I know we’re a more valuable asset to our Strike Group Commander today than we were before we completed SWATT.

As far as training goes, what is something you think the crews will be able to do better on their own after experiencing SWATT and receiving tailored instruction from the WTIs?

GM: All of us have to learn how to learn. It isn’t an easy thing to do, and when you’re a professional, it can be easy to trick yourself into thinking that you have the market cornered on smarts. The truth is that we have to continue to learn throughout our careers if we hope to stay ahead of our strategic competitors.

The team that came aboard was impressive, knowledgeable, and helpful. My team learned a great deal about each of the warfighting areas trained on during SWATT. They also learned about ways that they can access training and support to continue to sharpen their tools and provide feedback to the enterprise after SWATT. There’s no doubt that this was a great opportunity for my team to learn and grow as warfighters.

After going through SWATT and learning about potential areas that have room for improvement, what will you do to continue to improve the tactical proficiency of the crew going forward?

GM: Keeping our team engaged in tactical development through drills, advanced training schools for our teammates, and staying engaged with the WDCs through providing feedback and staying up-to-date with doctrine and TTP updates are critical ways that we can keep growing.

Capt. Cahill is currently the director of SMWDC Sea Combat Division. At sea he has commanded USS MONSOON (PC 4), USS PREBLE (DDG 88) and USS BUNKER HILL (CG 52). Ashore he has served on a number of COCOM and OPVAV Staffs.

Capt. Musser is a career Surface Warfare Officer who has served in a cruiser and multiple destroyers. A former commanding officer of USS Farragut (DDG 99), he is the commanding officer of USS Leyte Gulf (CG 55). He is a 1996 graduate of the U.S. Naval Academy and graduated with distinction from the Naval Postgraduate School with a Master’s degree in National Security Affairs.