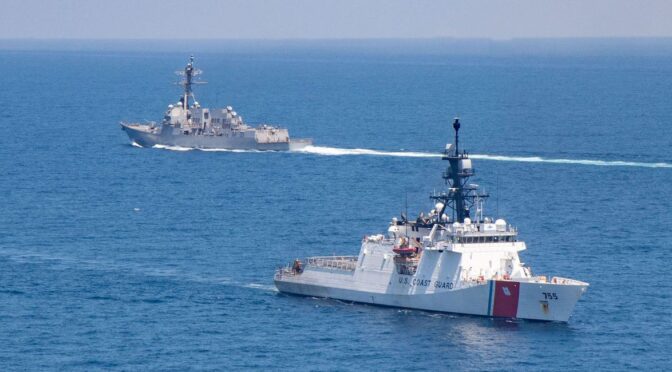 By James Goldrick and Blake Herzinger

It is high time that we remove the term “non-traditional security” from our consideration of maritime affairs, and either abandon it outright or confine it to the debates of sea-blind international relations pundits. A phrase that crept into the strategic lexicon in the long, calm lee of the last Cold War, “non-traditional security” is little more than a dismissive hand-wave relegating human-centric security issues to a nebulous category with no real meaning. As a term, non-traditional security at best adds no value in either the operational realm or in the analytic sphere. At worst, particularly in the maritime domain, it skews thinking and undermines a balanced approach to dealing with the challenges we face.

The idea that history ended with the collapse of the Soviet Union plays a part in both the origin of and the muddled thinking around “non-traditional security.” In a supposedly post-modern world, it was argued that the possibility of nation-state conflict had disappeared, or at least diminished to the point at which navies could instead focus totally on achieving good order at sea. Nation-state rivalries, of course, never did disappear, and great power competition has returned to occupy a large part of the strategic agenda. But it can never occupy the whole, just as, apart from the world wars, it did not occupy it entirely in the past — however heavily armed the time of peace concerned.

The U.S. Navy does not have a definition for non-traditional security. There is no applicable framework for determining what issues are encompassed by the term, although it could be said that it is used (incorrectly) to refer to tasks not directly related to naval warfare. Predictably, non-traditional security is then taken to mean any issue outside the core “warfighting” competencies of the sea services. This ignores the majority of naval history and poorly serves the services’ professional development. This schism is accentuated in the United States by the intentional division of labor between the U.S. Navy and the U.S. Coast Guard, which are in turn governed by separate bureaus of the U.S. government, in the Departments of Defense and Homeland Security, respectively. As the U.S. Navy retains no law enforcement authorities, it has intellectually divorced itself from many of the issues that define maritime security for most maritime forces.

Most allied navies do not have the institutional divisions of the United States’ sea services, but many still have the same confused priorities. Britain’s Royal Navy is one example. Although a Fishery Protection Squadron is its oldest formation, the Royal Navy has neglected that national maritime security task in British waters in recent decades, as the under-funded service sought to maintain its high intensity capabilities at the same time as it committed scarce resources — most notably its people — to the largely land-based conflicts in the Middle East. Ironically, the Royal Navy never abandoned its commitment to such work in areas such as the Caribbean in which Britain recognizes continuing responsibilities as the post-colonial power. Despite its endeavors in so many seas and in so many contingencies, the Royal Navy’s absence from its home waters in recent years may well have contributed to a diminished understanding by the British public of its importance to national security and therefore the under-resourcing of its force structure, which has only recently been arrested.

…used to deprioritize a set of serious maritime issues…

This is not an argument for large or medium navies to neglect either force structure or training for high intensity warfare. The truth is that such navies must walk and chew gum at the same time. There are inevitable tensions between providing for and managing the different parts of the spectrum of operations, but they must be acknowledged and properly managed. With many navies facing static or shrinking resources, fierce battles over allocation of those resources are de rigueur. Creating a subset of missions labeled as “non-traditional” allows them to be pushed to the bottom of the pile at the outset, where someone will address them if time, ships, or personnel are left over. If an operations planner has one ship available to deploy but two missions to service, “traditional” mission requirements will be satisfied, and “non-traditional” issues will languish unanswered. The so-called “traditional” security issues then take center stage, focused on high-end combat exercises or mission-oriented activities, such as deterrence patrols or freedom of navigation operations. This ahistorical categorization underwrites a mindset that inhibits the development of naval officers and promotes a cultural tunnel vision that overlooks many critical maritime issues.

…does not reflect reality, particularly for smaller navies…

Many navies, especially those with smaller fleets, are more focused on operational issues than training for high-end warfare. And most of those operations would commonly be labeled as “non-traditional security.” But to these services, such issues are just “security,” whether it be fighting terrorists in the Sulu and Celebes Seas, stopping sea robbers in the Strait of Malacca, or apprehending smugglers in the Gulf of Aden. For coastal communities that rely on the sea for their primary protein sources, fisheries patrols and environmental protection are hardly non-traditional or of secondary importance relative to missile firing exercises. The 1982 Convention on the Law of the Sea may have created much more extensive zones subject to national control — most notably the 200 nautical mile Exclusive Economic Zone — but this is a change in the scale, not in the nature of the maritime security challenge.

Indeed, applying the label of “non-traditional” to many maritime threats makes it more difficult to determine what is new and what has changed. Piracy, smuggling, slave trading and even illegal fishing are activities that are nearly as old as humanity’s first use of the sea for transport and as a source of food. And navies have been dealing with them for much of their existence as standing forces maintained by nation-states. To use an abused buzzword, good order at sea requires a holistic approach. Most of that work will take place below the threshold of naval combat, primarily focused upon issues that would fall within the nebulous “non-traditional” designator. Drug smuggling, human trafficking, piracy, sea robbery, terrorism, and illegal, unreported, and unregulated fishing (IUUF) are persistent and often interlinked issues, while high-end warfare is extraordinarily rare.

Labeling essentially all non-war issues as non-traditional builds an inflexible mindset, ill-equipped to see creative solutions to maritime problems that cannot be solved with a five-inch gun or anti-ship missile. Arguably, it also risks planners missing connections between illicit or criminal activities and nation-states seeking to exploit them to achieve advantage over their rivals in the shadowed areas between real peace and open war. Such tactics are much older than recent analysis of the ‘grey zone’ efforts of China generally acknowledges. Understanding that there are precedents not only in such activities but in the responses to them means that navies can be much better equipped to deal with the ‘grey zone’ with much less risk of either reinventing the wheel or pursuing policies that have already proved ineffective in practice.

…and does not reflect the enduring purpose of navies.

Creating a subset of maritime issues under the title of “non-traditional” reflects a narrow understanding of the fundamental question: “What is a navy for?” Not only does this problematic categorization minimize the issues that are of critical importance to partners and allies, but it also results in our own navies being ill-equipped to engage and assist when conducting security cooperation activities. Most critically, it results in them being intellectually and doctrinally ill-prepared.

Throughout history, from the age of sail to modern nuclear navies, the maintenance of good order at sea has required far more than simply fighting battles on the waves. Ensuring global commerce, protecting and evacuating citizens ashore, enforcing national law, and a myriad of other non-combat tasks have always fallen within the remit of military forces. Even a hero of naval high intensity warfare like Horatio Nelson had to do his share of these types of work as a young captain in the West Indies in the 1780s.

As the U.S. Navy and other navies work to recover the high intensity capabilities that have languished in the last few decades, it will be vital to understand that this renewed focus must be balanced with a recognition that many wider responsibilities of the naval service must also be fulfilled.

RADM (ret.) James Goldrick served in the Royal Australian Navy and has published widely on naval issues. He now has adjunct appointments at UNSW Canberra, the Strategic and Defence Studies Centre at the Australian National University, and ANCORS (Australian National Centre for Ocean Resources and Security).

LCDR Blake Herzinger is a Foreign Area Officer (Indo-Pacific) in the U.S. Navy Reserve and a non-resident WSD-Handa Fellow at the Pacific Forum.