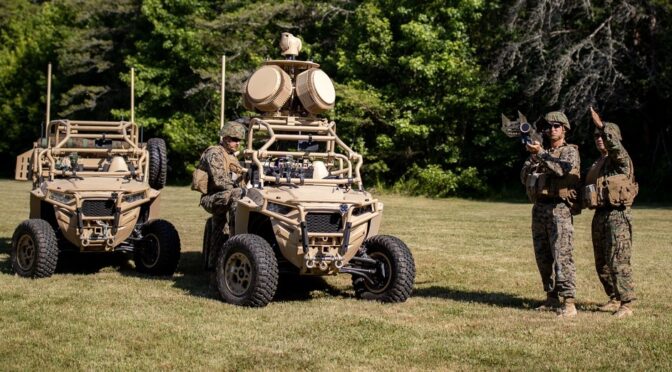 In the many discussions on the Marine Corps’ new Expeditionary Advanced Base Operations (EABO) concept, the subject of air defense seems to have largely fallen through the cracks and threatened a critical capability gap. More analysis must be focused on how these forces can be defended against various aerial threats and identify key capability gaps. By analyzing air defense across three broad categories, including advanced missiles, small drones, and traditional aircraft, EABO can be further strengthened as an operating concept.

The most discussed aspect of air defense as it relates to EABO is China’s advanced long-range missiles. This discussion is often couched in vague terms and usually centered on phrases like “targeting problems,” but boils down to three key points in practice.

The first is distribution to minimize damage. Barring a nuclear warhead, the damage inflicted by these missiles is both limited and localized. Distributing Marines ashore instead of trying to control the same seas with multi-billion-dollar warships limits the damage these missiles can individually cause to a handful of casualties and/or a single piece of major equipment. This may still outweigh the cost of the missile, but the margin is much closer and makes it possible to invert the exchange ratio.

The second point is that distributing forces into smaller formations makes them more difficult to detect, track, and target. China has invested extensively in sensor systems optimized to engage large warships, and that very optimization means these systems will not be as effective at identifying Marines distributed in small units ashore.

Finally, the corollary to small, distributed formations being difficult for Chinese sensors to locate is that decoys will be highly effective. If the Marines deploy numerous effective decoys alongside distributed forces, China will be forced into an unwinnable dilemma. They can either not use their weapons out of lack of confidence, or they can expend them against numerous decoys and cause minimal damage to U.S. forces. While the U.S. obviously has various decoys available and troops of all kinds have repeatedly shown their ingenuity in improvising decoys in the field, there has not been much public discussion of new decoys and the critical importance of decoys to EABO’s success.

The conclusion is that while EABO can be an effective strategy for mitigating the high-end missile threat through effective softkill countermeasures, more could be done to emphasize the use of decoys to defeat these weapons. This is particularly important to deterrence because China cannot effectively factor in the U.S. ability to decoy their weapons into their decision-making if these capabilities are not publicly advertised to a certain extent.

While small, swarming drones and loitering munitions are a very serious threat in many environments and have received significant attention and investment as a result, the actual threat in the Indo-Pacific region is greatly limited by the distances involved. These small platforms simply do not have the range to cross the hundreds or thousands of miles of ocean that will be between U.S. forces and hostile territory in most cases.

That said, there may be some areas where Marines are close enough to hostile territory for drone swarms to be used, and it is also possible drone swarms could be launched from maritime platforms, particularly those of the People’s Armed Forces Maritime Militia. There is still a need for distributable defenses against these platforms, and that need is being filled by the Marine Air Defense Integrated System (MADIS). This system should prove sufficient to contest this threat and protect Marines against small drones in a local area defense context, and its softkill mechanisms could prove invaluable for logistically intensive distributed operations. But it remains subject to debate whether the use of these jamming systems creates another telltale signature that could enable other forms of strike.

This threat category has been badly neglected in most discussions of EABO and risks completely collapsing the concept if ignored. The Marines currently do not have an organic anti-aircraft weapon capable of engaging high-altitude targets, making Marines poorly defended against a multitude of airpower tactics. Whether it be bomber attacks or drone strikes, Marines are currently defenseless against any aircraft at even medium altitude, and there do not seem to be plans to remedy this problem aside from hoping the joint force can provide the needed capabilities.

This oversight transforms many of China’s older and/or less capable aircraft like the H-6 bomber and Wing Loong drone into significant threats. They could loiter for long durations over islands suspected to have Marines at more than 20,000 feet, allowing them to perform detailed surveillance to help distinguish decoys from Marines and striking forces at their discretion. While it is true U.S. fighters could inflict casualties against these aerial assets, contesting advanced bases within an adversary’s weapons engagement zone makes it more likely that the adversary has greater counter-air capabilities and local air superiority. Attempting to interdict Chinese strikes against advance bases with airpower could draw U.S. fighters into exchanges featuring lopsided force ratios and exacerbate dependencies on limited tanking assets. Surface-to-air missiles on the other hand can sit persistently on islands to deter or contest hostile strikes, and can be rapidly repositioned after an engagement if sufficiently mobile.

Since the retirement of the MIM-23 Hawk, the only surface-to-air missile in Marine Corps service is the aging FIM-92 Stinger. Since the Stinger is first and foremost a man-portable system, it simply does not have the kinematic performance to engage aircraft unless they choose to come down to low altitude. But if there is no threat of high-altitude surface-to-air capabilities, aircraft will not be forced to lower altitudes where they can then be made susceptible to shorter-range systems like Stinger. Air defense therefore requires both high and low-altitude systems to effectively contest and deny airspace across its various dimensions and manipulate adversary air assets into maneuvering through engagement zones. The MIM-104 Patriot missile in active service can engage higher altitude targets, but Patriot is perhaps too large or logistically intensive to distribute as envisioned by EABO. It is also worth mentioning the National Advanced Surface to Air Missile System (NASAMS), which is in limited service protecting Washington DC, since this is a medium-range system which is smaller and lighter than Patriot. However, it is still a multi-vehicle networked system which would likely still be too difficult to deploy in the distributed, low-footprint manner envisioned by EABO.

Looking abroad, the closest to a suitable system is the Russian Buk which, while intended to operate as a networked, multi-platform system like Patriot and NASAMS, is also capable of operating as a self-contained, standalone single-vehicle system. Its unusual Transporter Erector Launcher And Radar (TELAR) combines medium-range missiles capable of engaging aircraft at any altitude with a radar, generator, and fire control center to allow it to be used with no external support systems. This makes it far more suitable to the distributed operations envisioned by the Marine Corps since a useful capability could be achieved with just one vehicle, and without the need for waiting for other enabling vehicles to be set up and connected. Such a capability should be able to facilitate the shoot-and-scoot tactics of distributed forces as well.

Of course, the Russian Buk is obviously not an option for the United States, but the U.S. should develop a similar single-vehicle, medium-range surface-to-air missile system, most likely using the RIM-162 Evolved Sea Sparrow Missile (ESSM). This missile is both smaller and more capable than the Russian missile, so an American system designed primarily to act as a standalone, land-based ESSM platform would be significantly more capable than Buk’s TELAR.

The current EABO concept, in conjunction with current developments, is broadly suitable for defending against advanced missiles and small swarming drones, but features a critical capability gap against traditional aircraft and large drones. Moving forward, the Marines should place more emphasis on decoys, both in messaging and procurement, and should also continue with the current MADIS program. However, by far the most critical step the Marines must take to make EABO workable is the urgent development of a medium-range air defense system.

Ben DiDonato is a volunteer member of the NRP-funded LMACC team lead by Dr. Shelley Gallup. He originally created what would become the armament for LMACC’s baseline Shrike variant in collaboration with the Naval Postgraduate School in a prior role as a contract engineer for Lockheed Martin Missiles and Fire Control. He has provided systems and mechanical engineering support to organizations across the defense industry from the U.S. Army Communications-Electronics Research, Development and Engineering Center (CERDEC) to Spirit Aerosystems, working on projects for all branches of the armed forces. Feel free to contact him at Benjamin.didonato@nps.edu.