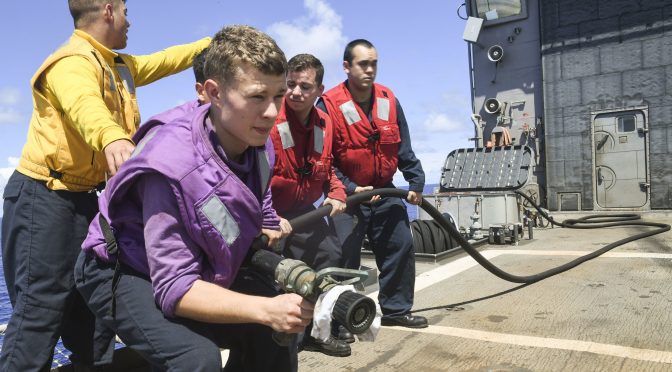 Senior leaders in the Navy are currently working with a partial dataset, one that is missing an untapped information source: aggregated input from junior personnel. This can be provided by creating an organized communication network of junior personnel (officer, enlisted, and civilian) to serve as an active repository for senior leadership, providing vital insights from the base of the Navy’s hierarchy.

For the first time in in decades, the Navy is operating in a world of great power competition. Across the organization, Sailors are being told that each of us must do our best to ensure that our Navy retains its competitive advantages. One of the most effective ways to do so is by informing planning and strategy. We must ensure Navy leadership has access to relevant information to procure and program tax dollars effectively to best deploy forces, develop weapons systems, and ultimately win our nation’s wars at sea.

Just as a computer model is only as good as its data, a leader can only make a decision that is as good as the information they are utilizing. To paraphrase Mr. James Geurts (Assistant Secretary of the Navy for Research, Development, and Acquisition), in order to win the fight, before the fight comes, the Navy needs to find new ways to be more agile, innovative, and collaborative.

Incorporating a non-discriminatory dataset from the junior ranks into senior-level decision-making could be an ‘X-factor’ for several reasons. First, it would provide senior leaders with crowdsourced, deckplate-level data that, in many cases, they are currently not receiving. Harnessing these collective insights from a generation that has grown up in a technology-fueled world that is entirely dissimilar from the early experiences of our senior leaders could pave the way for new strategies for how the Navy conducts business.

Additionally, adding this dataset would empower junior personnel to think critically about big-picture Navy issues and get them more personally invested. Transferring the collection and initial assessment of data on issues that the Navy values would not only include junior personnel more intentionally in the decision-making process, it would create an immersive, self-organizing learning environment with a high return on investment, increasing critical business acumen, and paying dividends as junior personnel promote and assume higher responsibilities. The best way to implement these processes and gather aggregated information would be through a collective group that serves as a liaison between the junior ranks and senior Navy leadership. This is currently being tested at the officer level.

As generations undergo a “changing of the guard,” it is imperative that Navy culture adjusts to better embrace, capture, and exploit new ways of thinking. As the United States continues to operate in an increasingly fluid and rapidly changing global environment, it is imperative that we leverage all resources, including the insights of our junior personnel, to deliver combat-credible military forces needed to deter war and protect the security of our nation.

If you are interested in learning more about the officer test program, please email njoc@navy.mil.

LT Adam Johnson is a Supply Officer currently serving in an Integrated Logistics Support internship at Program Executive Office Aircraft Carriers. He previously served as an instructor at the Navy Supply Corps School in Newport, RI as well as Assistant Supply Officer on USS LASSEN (DDG 82) in Yokosuka Japan. He is a graduate of the United States Naval Academy.

These views are presented in a personal capacity.