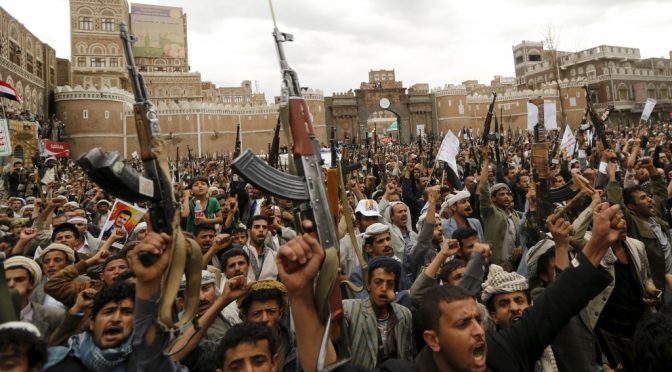 Iran and Saudi Arabia’s struggle for power in the Middle East and North Africa has led to many states becoming involved in their proxy wars. Some states have been left open to their intervention due to a power vacuum, and Yemen is no exception. Since the Houthi rebels’ overthrow of the Saudi allied leader Ali Abdullah Saleh in Yemen, both states have become involved (Malsin 2016). Since their revolution in 2011, the country has suffered from famine as well as airstrikes that have led to high casualty counts, particularly of civilians.

The Iran-Saudi Arabia conflict is often characterized as a religious divide between Shia and Sunni sects of Islam. However, when talking about the conflict in Yemen, it is most important to examine its location and strategic value to each of these states. Both states seek to gain ideological dominance and regional hegemony. This is due to many factors including their oil wealth, relative stability in the region as well as both of their religious sects and being seen as the leader of these sects. While religion is a factor for the conflict, particularly for Iran supporting the Shia Houthi rebels, this conflict is primarily centralized around Yemen’s strategic value for both Iran and Saudi Arabia.

Yemen is of particular strategic value for both states. For Saudi Arabia, Yemen’s proximity makes it concerned about border security. The Saudi-Yemen border is susceptible to infiltration from Al Qaeda in the Arabian Peninsula, a large terrorist group (Reardon 2015). This is one of the main reasons for their concern over the stability of the Yemeni government. This issue has led to their contribution toward propping up the government using ground support and airstrikes (Reardon 2015). But Yemen also sits along vital shipping lanes for Saudi Arabia in the Red Sea (“The Sunni…” 2016). Given that the Saudi economy relies heavily on oil and the safety of these routes, its interests rely heavily on the security of trade and its borders.

Additionally, they see Yemen as an easy target for Iran to take hold of in the Gulf region (Reardon 2015). Saudi Arabia currently holds hegemonic power in the Gulf region and it is concerned about the loss of this soft power given its intervention in states like Yemen and Bahrain. However, Yemen can be considered more easily controlled given its extreme instability. Iran has an easy path into the role of Yemen through common faith with the Houthi rebels. Iran seeks to find a solid foothold in the Gulf and Yemen is a good candidate because of the rebels’ strength. By propping up the rebels and joining with them based on their common sect of Islam they could potentially hold ground close to Saudi Arabia and use it as a bargaining chip in the future.

Religion certainly does still play a role in this conflict and is fuel for the fire but it is not the only source of tension. The Houthis are a Zaydi Shia militia and while this is not Iran’s brand of Shia Islam, they have chosen to align themselves with this group (“The Sunni…” 2016). Although this link is less strong than the Saudi’s pledge to the Yemeni government, both states have chosen opposing sides. Iran may be less involved in the conflict, financially and militarily, but more importantly, Saudi Arabia believes that Iran is backing the rebels to secure Shia hegemony and so prompts much of their involvement (“The Sunni…” 2016). While both countries are linked to the conflict by religion, they both have more stakes in the country than just these ties. Without other strategic value in Yemen, it is likely that these states would not be involved or less involved. Yemen’s location and strategic significance has likely prompted most of the conflict.

Due to Iran’s tenuous connection to the rebels, many have argued that their involvement is minimal and therefore Yemen’s conflict cannot be classified as a proxy war. Even though their connection is not heavily supported financially there is clear ideological support and since Iran’s involvement there has been more support for Iran in the region, threatening Saudi control and prompting their further involvement (“The Sunni…” 2016). Additionally, many have said that Yemen has primarily been a revolution of people given its beginning in 2011 during the Arab spring. Despite this, it was certainly a revolution against Saudi Arabia because of its support of the previous president and Saudi Arabia is keen on maintaining control over this strategic state. Iran saw this revolution as an opportunity to gain another ally in the Gulf and used their connection to the Shia rebels to gain access.

To the outside viewer religion may seem like the primary motivation for both states involvements. In the landscape next to Iran and Saudi Arabia’s various other conflicts, Yemen could be seen as another proxy war between the two rivals. However, Yemen is unique given its strategic location for trade and its vulnerable border shared with Saudi Arabia. Saudi Arabia’s involvement clearly lies in its interest in keeping the Yemeni allied government in power for these reasons while Iran saw the weak state as an opportunity to gain advantage over Saudi Arabia in yet another conflict and used its Shia ties to the revolutionaries to gain access. Therefore, while the religious divide has certainly fueled the desire of both states to be involved in the conflict, each has chosen to be a part of the conflict in Yemen because of its strategic geographic significance in the region.

Rose Cote attends Syracuse University, where she majors in International Relations and Economics. She did a semester abroad in Morocco to study Arabic, and will be joining the Peace Corps to work in Namibia after graduation.