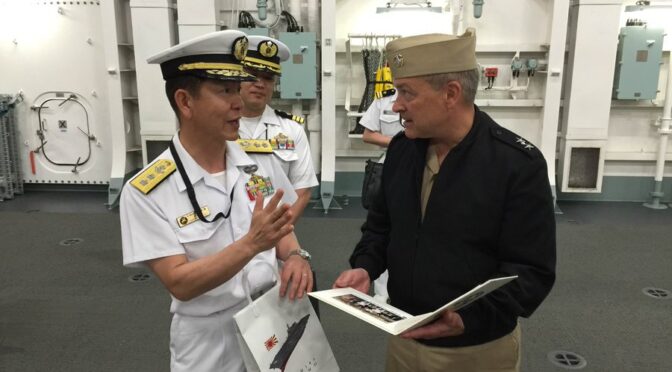 This is part one of a two-part series on the urgent need for a bilateral technology roadmap to field and sustain a lethal, resilient, and rapidly adapting technology-enabled Joint Force that can seamlessly conduct high-end maritime operations in the Indo-Pacific…a fitting legacy for former Japanese Prime Minister Shinzo Abe and his successor Yoshihide Suga, staunch champions of the enduring U.S.-Japan Alliance.

In today’s strategic environment of Great Power Competition (GPC), global powers actively vie for preeminence. The growing competition is particularly acute in the technology domain, as evidenced by the ongoing technology race amongst the world powers. The global powers invest heavily in Fourth Industrial Revolution technologies to build national power, global influence, and international prestige and to prepare for uncertain economic and security futures.

The United States and Japan are fully committed to national security technological innovation. The 2018 U.S. National Defense Strategy (NDS) and 2020 Defense of Japan (DOJ) White Paper call for the harnessing, investing, and protecting of their respective technology bases for competitive advantages. Both nations share the strategic imperative and urgency to develop and sustain a technology-enabled Joint Force (otherwise known in Japan as the Multi-Domain Defense Force) that can conduct synchronized, distributed, and integrated operations across the interconnected and contested battlespaces in furtherance of the alliance’s shared national interests. The changing character of warfare has made warfighting a transregional, multi-domain, and multi-functional activity. The U.S. Navy (USN) and Japan Maritime Self-Defense Force (JMSDF) must, therefore, better leverage emerging maritime technologies and developing concomitant naval warfare concepts and doctrines to adapt to the new way of fighting. Otherwise, the allied navies risk ceding the technology domain and consequently maritime superiority in the Indo-Pacific to the competing navies of revisionist China and revanchist Russia – People’s Liberation Army Navy and Russian Federation Navy, respectively.

For General Secretary of the Chinese Communist Party (CCP) Xi Jinping, technological advancement is not only a means to economic, political, and military power and influence for the CCP; it is also the “Long March” (or way) toward regional hegemony and ultimately global preeminence and an ideological end to itself: the Chinese Dream of national rejuvenation. The Chinese Dream offers hope for and validation of China as a great rising power after decades of political, economic, and social struggles. The commitment to advanced technologies reflects Beijing’s longing for past imperial glory (Middle Kingdom), its wishful guarantee against another century of humiliation (19th-century colonialism), and steadfast ambition to surpass the United States and Europe (21st century of Asia preeminence). To that end, China endeavors to become a global leader in every sector and domain and dominate emerging “game-changing” technologies like artificial intelligence (AI), autonomy, and blockchain in accordance with its Made in China 2025 and Internet Plus policy initiatives. To Xi, technological innovation, by all means, is necessary to surpass the West, and technological dominance is the path to realize global preeminence by 2049 – the essence of the Chinese Dream.

Russian President Vladimir Putin likewise understands and appreciates the disruptive potential of technology as he tries to restore Russia to its former greatness. In 2017, he presciently declared that “whoever becomes the leader in this sphere [explicitly AI and implicitly technology at large] will become the ruler of the world.” The bold statement summarizes well the purpose and intent behind the 2017 Strategy for the Development of an Information Society for 2017–2030, one of Putin’s key policy initiatives to rebuild Russia to its past Soviet glory. The technology strategy supplements and complements the greater 2015 National Security Strategy which reflects a Russia more confident in its ability to defend its sovereignty, resist Western pressure and influence, and realize its great power aspirations.

The Department of Defense (DOD) technological advantage depends on a healthy and secure national security innovation base that includes both traditional and non-traditional partners. (2018 U.S. NDS)

Japan will enhance priority defense capability areas as early as possible – strengthening capabilities necessary for cross-domain operations and core elements of defense capability by reinforcing the human resource base, technology base, and defense industrial base. (2020 DOJ White Paper)

The U.S. NDS and DOJ White Paper call for harnessing, investing, and protecting their respective national security innovation and technology bases to better respond to the growing challenges to the rules-based liberal international order (LIO) by illiberal powers like China and Russia. Washington and Tokyo both want to develop innovative technological approaches, make targeted and sustained technological investments, and execute disciplined fielding of critical warfighting capabilities to the Joint Force (Multi-Domain Defense Force ) – a force that can protect national and allied interests, advance the bilateral military-to-military relationship, strengthen the strategic alliance, promote the Free and Open Indo-Pacific, and uphold the LIO.

Now is the opportune time to build a bilateral technology roadmap to field and sustain a lethal, resilient, and adaptable Joint Force, enabled by technology, that can seamlessly conduct high-end maritime operations in the Indo-Pacific – a predominantly maritime fight in a maritime domain. To do otherwise is a missed opportunity to strengthen the enduring U.S.-Japan alliance, increase the stabilizing regional security, and reinforce the weakening LIO that has provided global security and prosperity for over 70 years.

The technology roadmap should leverage extant USN and JMSDF technology strategies and plans to identify and prioritize joint projects for collaboration across the respective governments, private industries, and academia. By doing so, the allied stakeholders can identify current, proposed, and potential collaborative projects. Stakeholders must assess the cultural, institutional, organizational, and legal challenges of each country to determine how best to promote and incentivize bilateral collaboration. They must also expand the framework to all the joint services, and eventually extend the framework to other key allies and partners in the region and beyond.

Purpose and Scope: In alignment with the defense strategies of the United States and Japan, the roadmap should examine the strategic environment in the innovative technology domain through the lens of GPC. This roadmap should:

Vision and Goals. The USN and JMSDF should contribute to the development and sustainment of a technology-enabled Joint Force. In the near term, both allied navies should develop a bilateral technology roadmap to deliver joint warfighting capabilities and increase joint warfighting capacities to the Multi-Domain Defense Force. In the long-term, each allied navy should modify its respective Doctrine, Organization, Training, Material Solutions, Leadership and Education, Personnel, Facilities, and Policies (DOTMLPF-P) to provide the infrastructure and systems required to support the development, fielding, integration, and sustainment of these new joint warfighting capabilities and capacities.

Objectives: The USN and JMSDF should consider broad and interlocked objectives to realize the aforesaid vision and goals. These include:

This concludes part one of a two-part series that calls for a bilateral technology roadmap to field and sustain a lethal, resilient, and rapidly adapting technology-enabled Joint Force that can seamlessly conduct high-end maritime operations in the Indo-Pacific. Part two underscores the imperatives to do so and describes the ongoing technology competition within the region through the lens of GPC in the 21st century.

CAPT Pham is a maritime strategist, strategic planner, naval researcher, and China Hand with 20 years of experience in the Indo-Pacific. He completed a research paper with the Office of Naval Research (ONR) at the U.S. Naval War College (USNWC) in 2020. The articles are derived from the aforesaid paper. The views expressed here are personal and do not reflect the positions of the U.S. Government, USN, ONR or USNWC.