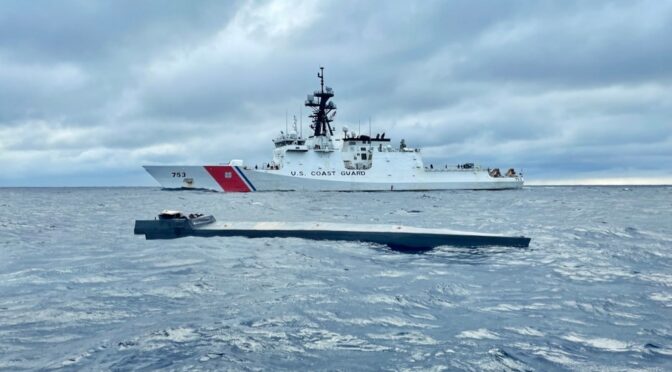 The Marine Corps is faced with an intensified challenge of contested logistics as it employs its novel concept of Expeditionary Advanced Base Operations (EABO). EABO calls for Marines to act as Stand-in Forces using low profile, highly mobile Expeditionary Advance Bases (EAB) that will likely be within an enemy’s Weapons Engagement Zone (WEZ). Supplying these bases will be difficult since their location is expected to frequently shift, and reliance on the conventional global logistics chain may not be responsive in a contested environment. A possible solution is the use of unmanned or autonomous Self Propelled Semi-Submersibles (SPSS) to provide logistics support. It is important to consider how SPSS will be classified under domestic and international law, and what rights and obligations will be imposed on them during peacetime and armed conflict.

Smuggling provided the impetus for SPSS. During Prohibition, bootleggers used SPSS to transport alcohol along the Mississippi river. Colombian narco traffickers embraced this technology to facilitate cocaine smuggling. Employing naval architects, they built a variety of models. The SPSS or Low Profile Vehicle (LPV) proved especially useful since it has only a small profile above the water making it difficult to detect visually or with radar. More recent versions of narco subs have proven to feature significant range and seaworthiness as exemplified by a recent transatlantic voyage from Brazil to Spain. Similar vessels have appeared in the Russian-Ukraine conflict.

These cheap vessels and their unmanned variants may provide an effective solution for mitigating degraded logistics for EABO within the WEZ. They are difficult to locate, and if found, easily replaced from a fleet built by commercial shipyards. They can be built to a desired size and in large numbers, controlled remotely or autonomously, and unloaded after beaching before being sent back to a logistics hub to be reloaded. They could be carried into forward areas by amphibious assault ships and landing platform docks and be deployed from well decks.

Combining efforts with the U.S. Coast Guard as a Red Cell could yield lessons learned as they continuously hunt for similar semi-submersible vessels. This collaboration could lead to improved vessel designs to avoid detection and solve the problem of degraded logistics in the WEZ. These vessels could provide a resilient and risk-worthy method of distributed resupply that would help stand-in forces endure in the fight.

If the U.S. Navy or the U.S. Marine Corps chooses to adopt an SSPS, it is important to determine how the vessel will be classified. U.S. forces would assert sovereign immunity over the vessel consistent with NAVADMIN 165/21 preventing it from being subject to “arrest, search, and inspection by foreign authorities.” The U.S. Navy recognizes several types of sovereign immune vessels: warships bearing the United States Ship (USS) designation, auxiliary vessels known as United States Naval Ship (USNS), United States Coast Guard cutters (USCGCs), DoD time-chartered U.S.-flagged vessels used exclusive for non-commercial service, and small craft (e.g., air-cushioned landing craft (LCAC)). In the case of voyage-chartered vessels, the United States “ordinarily claims only limited immunity from arrest or taxation.”

A U.S. Navy SPSS that are used solely for logistics support can be classified as either an auxiliary vessel or small craft. The Commander’s Handbook on the Law of Naval Operations (Commander’s Handbook) defines an auxiliary vessel as “vessels, other than warships, that are owned or under the exclusive control of the armed forces” used “only on government noncommercial service.” The exclusive state ownership or control for noncommercial use bestows sovereign immunity consistent with UNCLOS Article 32 and High Seas Convention Article 9. Small Craft, such as motor whale boats, air-cushioned landing craft, and all other small boats, craft, and vehicles deployed from larger Navy vessels or from land, are also sovereign immune U.S. property.

In 2022, the U.S. Navy deployed four unmanned surface vessels to RIMPAC 2022. Task Force 59 has also used unmanned vessels for experimentation with distributed maritime operations in the Fifth Fleet area of operations. Both NAVADMIN 165/21 and the Commander’s Handbook recognize the sovereignty of unmanned vessels that are commanded and crewed by remote means.

As nations compete in the gray zone below actual armed conflict, SPSS will have to operate consistent with the international law of sea. If designated a ship, vessel, or craft, SPSS will have to comply with the Collision Regulations (COLREGS) designed to ensure safe navigation during peacetime. The word “vessel” includes “every description of water craft, including nondisplacement craft, [Wing in Ground] WIG craft and seaplanes, used or capable of being used as a means of transportation on water.” These regulations, also known as the 1972 COLREGS have been adopted as U.S. Law (See 28 U.S.T 3459, 33 U.S.C. § 1601–1608, and 33 CFR part 81). Article 1139, U.S. Navy Regulations, 1990 requires the Collision Regulations be observed by U.S. Navy ships. The U.S. Coast Guard implements the Collision Regulations as part of its Navigation Rules for International and Inland waters (COMDTM16672.2D). SPSS will not be exempted from these requirements on vessels.

The Collision Regulations are intended to maximize safe navigation. They require a constant lookout (Rule 5), operation at safe speeds (Rule 6), and the use of a series of lights and signals clearly marking vessels (Rules 20-37). The lights and signals rules clearly pose a challenge to the stealth operation of an SPSS during armed conflict. The lighting requirements for an SPSS pose a problem in how the vehicle is defined. Rule 22 of the Collision Regulations sets the lighting requirements on a vessel by its size. Vessels 50 meters or more in length must use a masthead light visible for six miles and sidelights, stern light, towing light, and an all-around light visible up to three miles away. Smaller vessels have similar lighting requirements with visibility limited to as little as one mile. Rule 22(d) allows an exception for “inconspicuous, partially submerged vessel or object being towed” requiring only one white all-around light visible at three miles. Regardless of how an SPSS is classified, a light visible up to three miles will defeat the stealth approach to logistics.

If there is an armed conflict, there is an argument that the peacetime Collision Regulations no longer apply. The principal of lex specialis states that specialized law will supersede general law. If one views the COLREGS as a law of general application governing safe navigation during peacetime, it no longer applies once armed conflict begins as between the belligerents. It is supplanted by the Law of Naval Warfare. Neutral vessels are still entitled to the protections of the Collision Regulations as well as other obligations belligerents have toward neutral vessels.

The U.S. Marine Corps and Navy could benefit from experimenting with the use of SPSS for resupply in contested environments. Employing sufficient numbers of these low-observable vessels will help enable distributed logistics to expeditionary advanced bases. It can also help the U.S. supply allies and partners under blockade, such as Taiwan in a crisis, without having to risk considerably more expensive undersea assets. While certain legal implications and platform design questions remain, the potential of the capability is tangible.

LtCol Brent Stricker, U.S. Marine Corps, serves as the Director for Expeditionary Operations and as a military professor of international law at the Stockton Center for International Law, U.S. Naval War College. The views presented are those of the author and do not necessarily reflect the policy or position of the U.S. Marine Corps, the U.S. Navy, the Naval War College, or the Department of Defense.

One thought on “EABO Degraded Logistics in the WEZ: Self Propelled Semi-Submersible Solutions”