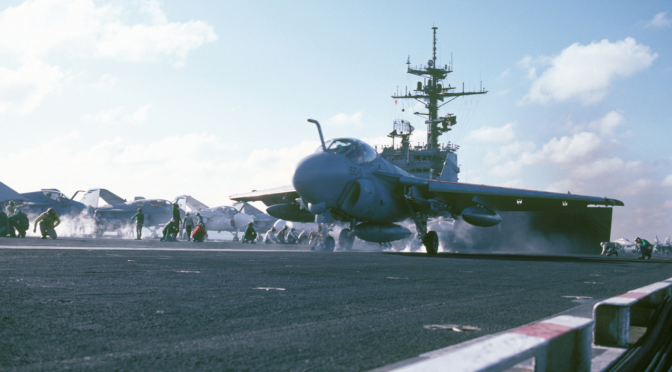 CIMSEC discussed the 1980s Maritime Strategy with Dr. Stanley Weeks, who as a Navy Lieutenant Commander helped assemble the first briefed iteration of the Maritime Strategy in 1982. In this discussion, Weeks looks at how that briefing came together, how it rapidly traveled up the chain of command, and how maritime forces can make the strategic difference in great power conflict.

After you received the initial strategy memo and became the action officer, how did you view the gravity and scope of what was being asked for?

I felt that there was a great opportunity for the Navy and Marine Corps team to claim and be recognized for a leading role in U.S. global defense strategy. With a new administration, committed in general strategy terms to an enhanced maritime role, and to ensuring that funding and resources would be made available to support that role, it would have been a grave mistake for the Navy not to articulate a clear and detailed strategy to justify that lead role.

How did the Maritime Strategy briefing come together in terms of how it was drafted and what sources were consulted?

The Maritime Strategy briefing came together very quickly in September/early October of 1982. Though I was the junior officer (pre-XO LCDR) in the CNO Strategic Concepts Group (OP-603) office, I requested to be the action officer to develop the Maritime Strategy, which then-VCNO Adm. Small had requested to kick off the CNO annual budget process. I drafted the briefing in a couple of weeks in early September 1982, primarily based on my own operational and academic experiences (including a Ph.D. in international relations and having just come from 13 months at sea running the operations of NATO’s multinational Standing Naval Force Atlantic (STANAVFORLANT) for British and Dutch admirals). It was also very much based on the work I did earlier in the summer of 1982 as co-action officer for the first-ever rounds of tank briefings by the combatant commanders for President Reagan.

After my initial drafting work, the Navy office which coordinated budget matters provided an officer, Commander Spencer Johnson, who added more detail to the defense planning elements of the briefing. Then after a quick review by our branch head and OP-06 (both in an acting capacity at this time) the Maritime Strategy briefing made it to the 2-Star Program Development Review Committee (PDRC) at the end of September 1982. In a very unusual move they blessed it on the spot and directed it to go, within the week, to the CNO and his 3-star deputies at the CNO Executive Board. They received the briefing the first week of October 1982, with new CNO Admiral Watkins approving the strategy that day—which was then briefed to Secretary of the Navy Lehman, who termed it consistent with his general strategy thinking and the best product he had seen as Secretary.

In assembling the war plans of the various theater commanders, did you see much friction or alignment in how they came together and how they planned to employ naval power in conflict?

I saw that, if properly articulated by the Navy, there was a basic symmetry between a maritime strategy of forward pressure on the Soviets in the northwest Pacific and the North Atlantic/Norwegian Sea, to threaten the preferred Soviet focus on the Central front in Europe, and therefore allow the Navy to make the strategic difference in a major conflict. Admiral Hayward, as CINCPACFLT before he became CNO, had already a couple of years prior indicated such a forward pressure focus in his strategy in the Pacific. Although the (Army) CINCEUR commander’s strategy briefing to the Joint Chiefs of Staff and the president just delivered in the summer of 1982 had little mention of the Navy/Marine Corps role in that theater, NATO had a new NATO Maritime Concept of Operations (which then-CINCHAN UK Royal Navy Admiral Sir James Eberle had shared in draft with me in 1981), and CINCUSNAVEUR London reflected that in their planning. The biggest problem which our briefing to the CNO Executive Board highlighted was that the theater commanders in the Atlantic and Pacific were each assuming they would be able to have allocated to them many of the same maritime forces. It was this “fat” that would have to be highlighted and then trimmed in our CNO Executive Board presentation to ensure the maritime strategy was operationally realistic.

What were some of the core tenets and takeaways from the briefing on the Maritime Strategy? How original and innovative were these concepts at the time?

The core tenets were, as noted above, “full forward pressure,” to posture and employ U.S. and allied maritime forces forward in peacetime presence, crisis, and conflict, to pressure the Soviets on their flanks, threaten their homeland (including, at the highest strategic level, their nuclear forces in the bastions) and therefore deter conflict. If deterrence failed, the U.S. would threaten the Soviet focus on a quick and overwhelming victory on the Central Front in Europe—all in order to use maritime forces to make the strategic difference and ensure war termination on favorable terms. The originality of this strategy was articulating how the maritime element of the national military strategy (and that is what we called it, despite aspersions later cast on a “service strategy”!) would, in the circumstances of that time, coordinate a global maritime response in multiple theaters using classic forward and away pressure.

How was the briefing received by its audiences? What sort of follow-on action did it precipitate?

As indicated above, the briefing was surprisingly well-received and approved within the space of ten days by both the Program Development Review Committee and then the CNO and his CNO Executive Board. In the process of the Executive Board deliberations, subsequent action was called for by the CNO to enhance certain aspects of readiness and munitions (which were being overlooked), and to emphasize the role of allies. Under the officer who relieved me as the OPNAV Maritime Strategy Action Officer in March 1983 when I went back to sea for my XO tour, my excellent officemate Peter Swartz, the strategy would undergo annual refinements (with many more aspiring cooks now lined up at the pot to no doubt help complicate Peter’s days!) until it was finally published in unclassified form in the January 1986 USNI Proceedings article by Admiral Watkins. (I confess to this day that I dislike seeing references to the “1986 Maritime Strategy” since this was essentially the October 1982 Maritime Strategy.)

Why did the Maritime Strategy “work,” if it did, and what about the process has been challenging to replicate since then?

I like to think that the Maritime Strategy was a success because it clearly articulated the case, in a way accepted inside and (largely) outside the maritime services, of how the maritime forces would make the strategic difference in the strategic context of the time. Perhaps the best metric of our strategy’s success was that it became the baseline for almost a decade for how the maritime services budgeted their forces, and for how they planned and exercised these forces. As Secretary of the Navy Lehman’s recent book Oceans Ventured indicates, such force posturing and exercising had already begun in 1981 based on the general strategy outlines of the new administration, even before the more detailed actual Maritime Strategy of October 1982 was formally articulated and approved. By the time I was commanding the 1987 Baltic Operations flagship and the 1988 NATO STANAVFORLANT flagship USS Hayler (DD-997), such exercising to the tune of the Maritime Strategy was in full bloom.

What lessons can be taken from the 1980s Maritime Strategy for engaging in modern great power competition?

Leaders must articulate clearly how the maritime forces element of the National Military Strategy will make a strategic difference to deter great power conflict and, failing that, to threaten vital strategic geography and forces of the enemy to help bring war termination on favorable terms to the U.S. and its allies.

Based on this strategy articulation, maritime force leaders must press tirelessly for funding for the maritime forces required, but ensure a force balanced in readiness and numbers—and ready to work together with the other services and with allies.

U.S. allies are still a vital political and military force multiplier, the likes of which other great powers do not have. Each ally though is a relationship requiring routine cultivation—and, when frustrations arise, requires us to remember Churchill’s observation that the only thing worse than fighting a war with allies is fighting without them.

Dr. Stan Weeks has extensive strategic and operational planning experience in business, defense, foreign policy, and international and regional security contexts. He joined Science Applications International Corporation (SAIC) in 1990, following a prior 24-year career in the U.S. Navy, including duty on the OPNAV staff as the first action officer and drafter of the Maritime Strategy in 1982-1983, and service as an OSD exchange officer to the State Department Politico-Military Bureau. From 1994 until his retirement in 2016, he was also an Adjunct Professor of the Naval War College, teaching the National Security Decision Making (NSDM) graduate course (strategy and force planning, and executive leadership) to Washington area students from the military, government agencies, and Congressional staffs. From 2007-2012, Dr. Weeks was an Adjunct Professional Staff Member at the Institute for Defense Analyses (IDA), supporting the Secretary of Defense and the Chairman of the Joint Chiefs of Staff, where his work included Asia-Pacific engagement and force posture, Defense Planning Scenarios for QDR 2010, counter-piracy strategy, and the outline for a new National Defense Strategy. From 2009-2011, he was a Research Analyst at the Center for Naval Analyses (CNA)’s Center for Strategic Studies (where he wrote the study on recent evolution of Joint and services strategies. His education includes:  U.S. Naval Academy 1970; Olmsted Scholar, University of Madrid, Spain 1974-76, Doctoral and graduate Latin America Studies; M.A. 1973 and Ph. D. 1977 in International Studies, The American University; Strategy Faculty, National War College 1988-1990.