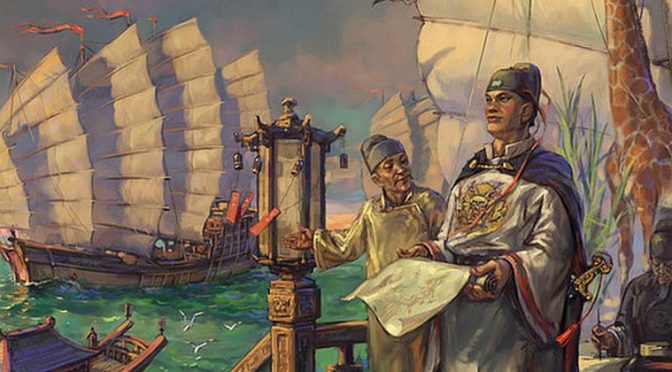 The following article originally featured on The Bridge and is republished with permission. Read it in its original form here.

Once upon a time, there was a great and powerful nation. With booming trade, strong defense, and unparalleled pride, this land stood apart from all others as the finest in the world. As others struggled with disease, conflict, and stagnant economies, this country shone as a beacon in a storm. And importantly, its Navy was the envy of the world, protecting trade and sailing the high seas.

This nation was China, during the Ming dynasty in the 14th Century. The leader of its Navy was the quasi-mythical Zheng He, a palace eunuch who rose to glorious power, but was eventually erased from the history books.The rise and fall of Zheng He has striking parallels to the rise and fall of the United States Navy today. To avoid repeating the unfortunate history of seafaring superpowers, the United States must embrace the role of its Navy as an essential instrument of a successful, enduring nation.

In the middle of the fourteenth century in China, at the end of a line of harsh Mongol rulers, the Ming dynasty rose to power. One of the first acts of the new emperor, Zhu Di, was to build a massive naval armada. Rather than rely only on overland routes, he intended to exercise trade, diplomacy, and prove the sheer awe of Chinese power through his navy.

He nominated a palace eunuch who had risen in favor with the new regime, a Chinese Muslim by the name of Zheng He, to lead this force. Zheng was rumored to have “stood seven feet tall,” and his ability to speak both Chinese and Arabic was seen as a prudent choice for an expedition that would sail the Indian Ocean and interact with other Arabic-speaking peoples.[1]

Zheng He’s fleet boasted more than 300 vessels. Unlike the typical European ships of the day, his were of enormous, complex construction and opulent adornment. Each ship housed more than sailors—doctors, soldiers, engineers, and statesmen made Zheng He’s fleet a floating arm of Chinese influence. Indeed, for more than 30 years, China dominated the sea lanes to its west, ensuring safe passage of its trading vessels and even engaging in limited conflict to secure favorable bases of support for its large fleet.[2]

China’s dominance of the seas was short lived, however. New emperors came to power who viewed naval voyages as “extravagances.”[3] Rather than respect the value of a navy to a great power, rulers began to look inward. Political power was legitimized by building things Chinese subjects could physically see and attribute to the greatness of the emperor, as opposed to a Navy that operated far from China’s shores.

It is a historical irony that the Ming dynasty traded what was the world’s greatest naval power, and used their treasure to connect and finish the Great Wall into what it is recognized as today. Soon, internecine conflict and pride erased nearly any mention of Zheng He and the grand Chinese armada from the national memory.[4] For much of the next 600 years, China’s focus would remain within, even as their relative global power all but evaporated.[5]

The lessons of Zheng He’s China teach a great deal about how a global superpower maintains its own geopolitical interests in the face of shifting domestic priorities. A strong Navy is a decisive component of the military instrument of national power, based on its unmatched ability to project power around the globe.

From John Paul Jones to The Great White Fleet to today’s Navy, it is easy to view the lens of America’s Navy as another incarnation of Zheng He’s: an awe-inspiring representation of the nation’s technological and economic might. The founders of the United States recognized the importance of a Navy to a prosperous nation, specifically enunciating in the Constitution that Congress must “provide and maintain a Navy.”

Yet, as in Zheng He’s time, competing policy choices and uncertainty as to America’s role in the world has eroded the commitment to maintain a naval force representative of the country’s geopolitical interests. Austerity and sequestration have slashed budgets with scant regard for shipbuilding, maintenance, and future fleet architecture. 650 years later, the United States Navy has fewer ships to its name than Zheng He’s armada.[6]

The decline in quantity and quality of America’s ships-of-the-line will do great harm to the American people. The United States Navy is the bellwether of American power, protecting the nation from harm and safeguarding global commerce. The tragedy of both Zheng He and contemporary American navalists is their failure to adequately convince the population of the necessity of its Navy.

Thomas Jefferson once wrote that “industry, commerce, and security are the surest roads to the happiness and prosperity of people.”[7] The Navy has been the guarantor of American happiness and prosperity since the nation’s earliest days. Yet, as the visible vestiges of American commerce have transformed from small markets and shops to massive online storefronts with inventory shipped by robots from warehouses, the average citizen’s concept of how commerce is enabled may be declining.

To this citizen, the ubiquitous nature of the Internet and online commerce might seem to suggest that modern military forces are becoming obsolete in the face of digital citizenship. Few people think about the steps between pressing “purchase” and receiving a good at their doorstep. In a tumultuous political climate, this leads many to clamor for decreased military spending and a more insular focus on domestic affairs. Yet this sentiment erodes the very naval service that ensures massive online commerce can thrive in the first place.

The percentage and volume of global trade by sea has shown no signs of slowing down. Whether iPhones, oil, or automobiles, most of the imported items belonging to a typical household have come to this country by sea. These items are carried on ships without guns or inherent self-defense measures. These ships transit through chokepoints controlled by nations with their own interests, who would rather leverage their own power at the expense of America’s supply of Apple devices.

The importance of a Navy is not a difficult concept. For example, if a saboteur has blocked both ends of the street on which you live, you may think of three potential responses: 1) stay home; 2) find another way out, though you are likely to leave the house less often and bring fewer things with you; 3) fight back. For businesses and nations who ship goods by sea, the first two options are unprofitable and untenable. It is only through a strong Navy that the third option is possible.

The consequences of a declining Navy are perceptible and stark. Though it took a few centuries, China’s inward focus eventually led to the crumbling of their sovereignty and, eventually, occupation by a foreign power. More contemporary examples, such as Great Britain and Spain, are instructive as they show nations on the declining slope of naval power dependent on a foreign power—the United States—to maintain freedom of the seas in accordance with its own interests.

If the United States abdicates its role as global naval power, either deliberately or through unchecked erosion of capability and credibility, she risks a radical plummeting of national and economic might. Nature and the sea both abhor a vacuum; in yet another irony, if the United States cannot maintain the global sea lanes, China may take its place as guarantor. An American economy and national security dependent on Chinese interests and the application of Chinese naval power would be weak and brittle, bringing extreme hardship to the American people.

More than ever, a strong Navy is required to protect the millions of tons of shipping that make possible American economy, infrastructure, and the basic political lives of her people. A citizenry may grow weary of land wars, but it cannot forsake trade and security. Nations that cannot protect open, unfettered access to the sea will fail. For these reasons, the United States Navy is not a nicety; it is a necessity.

History provides clear channel markers for decision makers today. The United States cannot repeat the curse of Zheng He; she must clearly articulate and re-prioritize a strong Navy that is present, capable, and credible.

Roger L. Misso is a naval officer, aviator, and speechwriter. He is currently a student at the John F. Kennedy School of Government at Harvard University and a featured contributor to The Strategy Bridge. The views expressed in this article are the authors and do not represent the views of the U.S. Navy, the Department of Defense, or the U.S. Government.

[1] Stockwell, Foster. Westerners in China: A History of Exploration and Trade, Ancient times through the Present. Jefferson, NC: McFarland & Publishers, 2003.

3 thoughts on “Breaking the Curse of Zheng He: The Enduring Necessity of a Strong American Navy”