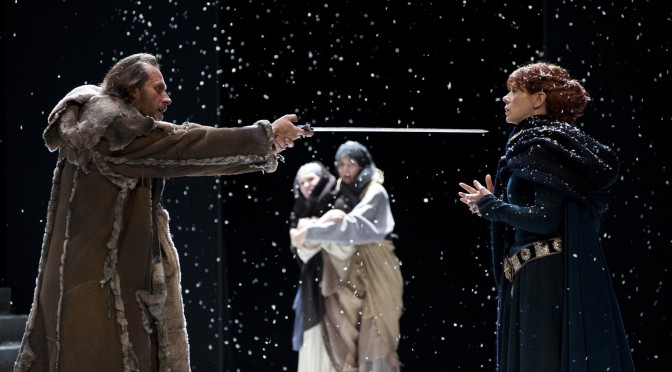 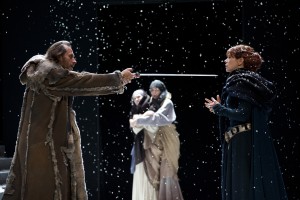 David Greig’s Dunsinane, while set in the centuries-ago land of Scotland, offers a modern perspective on the nature of war, peace, language, and politics. The events of the production explore the interplay between Siward, commander of English forces in Scotland, Malcolm, the English-installed King of Scotland, and Gruach, formerly both Lady Macbeth and queen of Scotland. Through several rounds and layers of intrigue, Gruach sows enough discord and mayhem to keep English forces at bay. Malcolm, for his part, does his best to engage with Siward in an attempt to illustrate that the use of overwhelming force is not always tenable. After a betrayal late in the first act, the second act functions as an extended denouement, with less action and less emotion. Indeed, the conclusion of the play, with a wandering Siward numbly stumbling out of the scene, parallels the endings to French and U.S. operations in Vietnam, Russian and ISAF campaigns in Afghanistan, UN experiences in Somalia, and the US adventure in Iraq.1

Nuanced allegiances come to the fore in the first act when Siward and Malcolm discuss their own perceived strengths. Siward wishes for Malcolm to act forcefully and seriously, rather than be thought of as a drunken playboy. Malcolm’s subsequent lecture on the desirability of being perceived as weak while operating from a position of strength mirrors current discussions on the rise of Chinese power in the Pacific, echoing Sun Tzu’s exhortation to “appear weak when you are strong.”

The arbiter of the legitimate exercise of violence in Scotland owes more effort than simply appreciating Gaelic songs and lilts.

That Malcolm channels Sun Tzu is not an accident — throughout the play, Malcolm uses a longer, strategic vision of conflict, whereas Siward focuses on the operational level. Siward initially senses that, having “ended” the fighting through the regime change at the end of Shakespeare’s Macbeth, peace is nigh for Scotland and its clans. Throughout the play, Siward’s lack of vision and misunderstanding of the country that he now occupies enables Gruach and the Scottish clan leaders to undermine the English vision for peace. Gruach’s admonition at the end of the play — “you’ve been in Scotland a year, and you still don’t know the language!” — drives home the point that Siward, as the arbiter of the legitimate exercise of violence in Scotland, owes more effort than simply appreciating Gaelic songs and lilts.

Siward’s lieutenant, the tactical supervisor, has no appreciation for Scotland beyond its resources and his survival. He realizes through collaboration with his ostensible foes along with exploitation of war trophies that he has no investment in Scotland, and indeed survives through tactical fits of inaction. His inaction comes back to haunt him at the end of the first act, when, after witnessing a brutally treacherous and suicidal act, he helplessly cries out “we have got to get the fuck out of here,” an exclamation that could be heard on any of a dozen fields of quagmire.2

The slower, more deliberate second act has a scene with the line

Here again the play foreshadows discourse about assumptions of a zero-sum world of power. In instances such as China’s increasing influence in the Pacific and the adventures of Vietnam, Iraq, and Afghanistan, there exists a tendency to leave alternatives to military-centric actions on the table. This unexamined default course of action leads to a path dependency wherein strategic leaders are stuck; they cannot simply withdraw, nor can they simply win. Strategic leaders in those situations, as Malcolm remarks about the English in Scotland, are committed to an extended dance of saving face. In this case — as well with Vietnam, Iraq, Afghanistan, et al — peace operations entail vastly increased losses of materiel, personnel, and treasure.

Greig acknowledges the creeping existential dread that has accompanied interventions since Korea.

Put another way, assumptions of power as a zero-sum game are increasingly outmoded.3 Dunsinane anticipates requirements for transitioning towards alternative concepts of power and peace. Interestingly, through Siward’s downward spiral, Greig acknowledges the creeping existential dread that has accompanied interventions since Korea. In doing so, he makes the case that hard, coercive methods may only have existed as an effective means of exerting power and making peace for a narrow slice of the early 20th century.

Dunsinane’s last and most vivid impression — that of the formerly upright and powerful Siward stumbling around a frozen loch, trying to “find a new country” — conjures images of Africa, Southeast Asia and the Indian subcontinent in the mid 20th century, with former powers retreating from far-flung lands and their subsequent search for a new identity. At the same time, Siward’s search for “a new country” calls to mind Hamlet’s “undiscovered country” of a life after death. Judging from Grieg’s narrative, newly post-colonial countries may indeed have to undergo a rebirth if their Siwards are to find peace.

LT Vic Allen serves at the U.S. Naval History and Heritage Command and serves as CIMSEC’s Director of Social Media. He can be followed at Medium here. All posts contain the authors’ opinions alone and do not represent any of the military services or the Department of Defense.

2. The mostly civilian audience laughed at this line, which struck me as oddly incongruent with the sad and violent end of the first act. 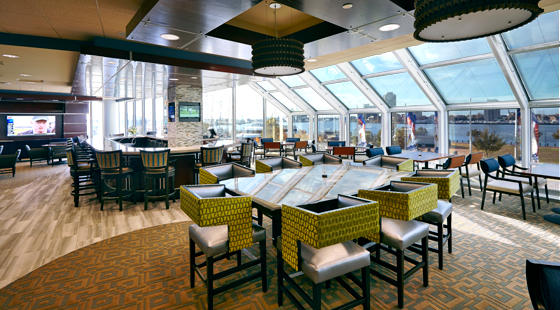 The Hampton Roads chapter is proud to announce the September meet-up, which will kick off at 6:30pm on Tuesday, September 9th and will be held in the Elizabeth River Room at Town Point Club in downtown Norfolk.

Butch Bracknell, CIMSEC member and author of the recent op-ed “Trimming Presidential War Powers,” will be addressing members on recent events in Iraq and Syria with an eye to their strategic and maritime implications.

All are welcome, but RSVPs are required (RSVP Here), as it will determine how much food is ordered for everyone. Please also note the dress code of business casual. Hope to see you for an evening of maritime discussion!