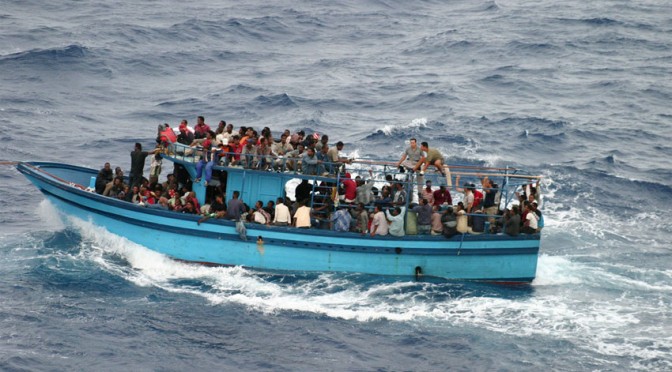 The Mediterranean is in crisis. The flow of migrants trafficked illegally by sea has reached the level of a humanitarian tragedy. It also places a heavy burden on the shipping industry. The International Maritime Organization (IMO) recently convened a meeting to identify ways out of the crisis. As became clear, responding to the crisis requires new forms of coordination. Various actors ranging from humanitarian agencies to coast guards, navies and the shipping industry will have to start to act concertedly. Information on the launch and movement of migrant vessels needs to be shared, but also evidence on the criminal networks organizing the trafficking. At the meeting participants pointed to the parallels to another maritime security crisis: the scourge of piracy off the coast of Somalia. Escalating from 2008-2012, piracy in this area has since been successfully contained. Are there indeed useful lessons from Somali piracy? The results from the ongoing lessons learned project of the Contact Group on Piracy off the Coast of Somalia, led by Cardiff University, show, there are at least three:

Responding to crisis requires to build trust and reach political consensus among states, but also national and international agencies. The IMO meeting was a right step into this direction, but more will be needed. To fight piracy a contact group was created which worked in a flexible and inclusive manner. The group meets bi-annually and over 80 states and agencies concerned about piracy participate. The Contact Group has also dedicated working groups that meet more frequently and address specific issues, such as the legal situation, or the coordination of criminal investigations. This format allows for consensus building, information exchange and perhaps most importantly to develop shared understandings of the situation and what action is required. In such a format actors met as equals. None is on top, no one on tap. Political tensions and geopolitical disagreements can be circumvented. A contact group format allows for a close engagement with littoral states. Adopted to the migration crisis, it will allow to better integrate the North African states into activities. Creating specialized working groups on operations at sea, coordination with shipping industry, criminal investigations, and harmonizing law is promising to improve the response in the Mediterranean.

Tackling a maritime crisis requires efficient information sharing and coordinated operations. In addition to the Contact Group, in counter-piracy this was achieved through a regular shared awareness meeting, known as SHADE, and an Internet based information sharing network, called Mercury. Mercury is the Facebook of counter-piracy. It allows for speedy communication through online chat, and the voluntary reporting of the position of vessels, aircrafts and patrols. Surveillance can be optimized, rapid responses to incidents organized, and an overall division of labour facilitated. It is a system that has proven to deliver. Focused on operational coordination, it allows to avoid political tensions. SHADE and Mercury were initiated by the three major multi-lateral counter-piracy naval missions led by the EU, NATO and the US. These launched the process and soon handed over the chairmanship that became rotating. A similar system can easily and quickly be installed in the Mediterranean Sea. The two multilateral operations could take the lead, that is, the EU’s Frontex and NATO’s Operation Active Endeavour. Given the significant presence of the U.S. navy in the region, also the US might assume a leading role.

The third major lessons from piracy is that long term solutions lie on land. Although we are facing a maritime crisis, vessels are launched from land and transnational criminal networks, whether it is pirates or human traffickers, require coastal infrastructure and anchorage. When counter-piracy in the Gulf of Aden started Somalia was in a disastrous state. Back then no one believed that it could soon be on the way to a functioning state. Today, the villages that used to harbour pirates have stopped doing so. Somalia has a functioning government. Although it still has a long way to go, it is on the path to recovery. None of this would have been possible without the increased efforts of the entire international community. Today, it is Libya that requires a similar new deal, should there be any prospects to halt the trafficking of migrants.

What should be clear in the meantime: the migration crisis is no longer a European problem. Rightfully, international actors such as IMO and other United Nations agencies have started to engage. Concerted efforts by the entire international community are required. New frameworks of coordination are needed. With all the crisis talk, one should however not forget about long term consequences. Once the immediate crisis is over, the new mechanisms will have to be transferred to other organizations. There is a range of mechanisms in the Mediterranean that could play this role, such as the Union for the Mediterranean or NATO’s Mediterranean Dialogue. Addressing the crisis will require new ad hoc solutions. But also a strategy of how the problem can be managed in the long run. This is yet another lesson from counter-piracy.

Further information on the Lessons Learned Project is available at http://www.lessonsfrompiracy.net

Dr. Christian Bueger is Reader in International Relations at Cardiff University. He is the principal Investigator of the ESRC funded Counter-Piracy Governance project [ES/K008358/1] . He is also one of the lead investigators of the Lessons Learned Project of the Contact Group on Piracy off the Coast of Somalia and an Associate Editor of Piracy-studies.org – The Research Portal for Maritime Security. Further information is available on his personal homepage.