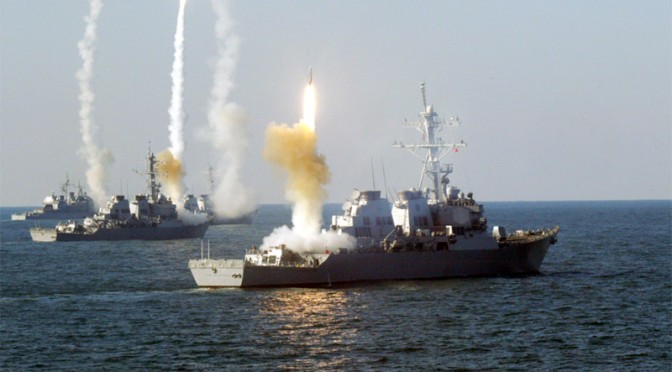 The newest concept being forwarded by U.S. Navy surface fleet leaders is “distributed lethality”, in which almost every combatant and noncombatant surface ship would wield offensive missiles such as the Naval Strike Missile (NSM) or Long Range Anti-ship Missile (LRASM). The concept’s central idea is that deploying a large number of U.S. ships able to threaten enemy ships, aircraft, or shore facilities will create a potentially unmanageable targeting problem for potential adversaries. This, it is argued, could deter opponents from pursuing aggression and in conflict could compel adversaries to increase their defensive efforts, constrain their maneuver, and spend valuable time finding and defeating U.S. forces in detail.

Implementing this concept should start with the Navy’s surface combatants, rather than its numerous unarmed non-combatant ships. Arming the Navy’s more than 60 logistics and support ships with offensive missiles and providing them the command and control systems to coordinate their fires will be costly. And once equipped, these noncombatant ships will become more attractive targets while not being better able to protect themselves unless further investments are made in defensive systems. In the end, offensive operations could distract noncombatant ships from their primary missions and reduce the endurance of combatants that depend on them for fuel and to conduct less stressing missions such as training and counter-piracy.

Given the challenges in using supply and support ships for offensive missions, the first step to implement distributed lethality should be to ensure all the Navy’s surface warships are able to conduct offensive operations. These consist of amphibious ships and surface combatants.

The fleet’s approximately 30 amphibious ships conduct offensive operations using their main battery of embarked Marines, which could be complemented with offensive missiles. The best way to do this would be with vertical launch system (VLS) magazines. While amphibious ships have more defensive systems than non-combatant ships, they still may not be sufficient for some environments. Since a VLS can host a wide range of missiles, it would enable an amphibious ship to increase either its offensive or defensive weapons capacity based on the intended mission and threat environment.

Small surface combatants such as minesweepers, patrol craft, and Littoral Combat Ships (LCS) have only a few short-range offensive weapons. The stated intent of surface fleet leaders is to augment these on LCS with long-range surface-to-surface missile launchers, but the launcher being considered is specific to a weapon such as NSM, rather than a more versatile VLS array. As with amphibious ships, LCS may need to increase its defensive capacity if it is pursuing more offensive operations. A VLS magazine would enable LCS to load more defensive missiles along with offensive weapons, with the additional benefit of being able to protect a nearby ship from air threats as an escort–a capability it lacks today.

Large surface combatants such as cruisers (CG) and destroyers (DDG) have VLS magazines, but are unable to make room in them for more offensive missiles because of the surface fleet’s current air defense approach. This approach is designed to engage enemy aircraft and missiles in multiple layers starting from long range (from 50 nm to more than 100 miles) through medium range (about 10–30 miles) to short range (less than about 5 miles). Each layer is serviced by a different set of interceptors, with those for the long-range layer (e.g., SM-2 and SM-6) being the largest and most preferentially used. Electronic warfare jammers and decoys are also used from medium to short range, but only after interceptors have been unsuccessfully expended against incoming missiles.

This layered air defense scheme puts surface combatants on the wrong end of weapon and cost exchanges. Using today’s standard shot doctrine of “shoot, shoot, look, shoot” (SS-L-S) the complete 96-cell VLS capacity of a DDG (if all devoted to air defense) would be consumed against fewer than fifty ASCMs—missiles that would cost the enemy about two percent the price of a DDG.

Better long-range interceptors will not improve the weapon exchange and only exacerbate the Navy’s cost disadvantage. The SM-6 interceptor that entered service last year is faster, longer range, more maneuverable, and has a better seeker than the Cold War-era SM-2 but costs about $4 million compared to $680,000 for an SM-2. Meanwhile a typical advanced ASCM costs about $2-3 million. Given a SS-L-S firing doctrine, each defensive engagement using SM-6s will cost two to four times that of the ASCM it is intended to defeat.

The size of VLS magazines cannot be changed; therefore making VLS cells available for offensive weapons will require either using fewer air defense interceptors or getting more interceptors into each VLS cell. The Navy could use fewer air defense interceptors by changing its shot doctrine to S-L-S. The SM-6 shows improvements in interceptor lethality are possible and could eventually make a S-L-S doctrine viable. But a S-L-S doctrine will still require initial engagements to occur far enough away to allow a second engagement before the incoming ASCM hits the ship. This will require large, long-range interceptors such as SM-6 that take up a whole VLS cell and over-the-horizon (OTH) targeting from another ship or an aircraft. In the end a shift to S-L-S would only double air defense capacity at best and may not free up many VLS cells for offensive missiles.

Alternatively, the Navy could fit more interceptors into fewer VLS cells by shifting to a shorter-range air defense scheme. Shorter-range weapons such as the Evolved Sea Sparrow (ESSM) Block 2 that will debut in 2020 are smaller than longer-range interceptors and can exploit the same lethality improvements as SM-6 to achieve a high probability of defeating incoming ASCMs. The ESSM fits four to a VLS cell–quadrupling air defense capacity–while it’s range will be about 10-30 miles. It would thus engage incoming ASCMs at about the same range as electronic warfare (EW) jamming, deception, and decoy systems (depending on the ASCM’s altitude). This will make it possible for EW to reduce the number of interceptors expended, compared to today’s scheme in which EW is only used after interceptors have failed.

A 10-30 mile air defense scheme will also prepare the surface fleet to integrate new weapons such as lasers and electromagnetic railguns (EMRG) that will likely be mature in the early to mid-2020s. While these weapons cannot fully replace interceptors, they could enable the Navy to shift additional VLS capacity to offensive missiles. The shipboard lasers expected in this timeframe would be effective against ASCMs out to a range of about 10 miles while an EMRG will be able to engage incoming ASCMs out to about 30 miles. At longer ranges, the unpowered EMRG projectile will take too long to reach an incoming ASCM, which could maneuver and cause the EMRG to miss.

The resulting air defense scheme would consist of lasers, EMRGs, interceptors (e.g., ESSM), and EW systems engaging incoming missiles in a dense layer 10–30 miles away from the ship. This is far enough away for a surface combatant to protect another ship while each ship’s self-defense systems would engage “leakers” at 2–5 miles. Automated decision aids that match air defense systems to incoming missiles will be an essential element of this scheme since multiple systems will be engaging incoming missiles at the same approximate range. These aids are inherent to the Aegis combat system, but would have to be upgraded to incorporate new weapons such as lasers and EMRGs

Offensive anti-air warfare (AAW) is the other side of this new air defense approach. While air defense shifts to 10-30 miles using weapons such as ESSM and lasers, longer-range interceptors such as SM-2 and SM-6 would focus on shooting down enemy aircraft before they can launch ASCM attacks. SM-6s, in particular, can engage enemy aircraft outside their ASCM range and are much less expensive than the aircraft they will destroy, producing a more advantageous cost exchange than using SM-6 against enemy ASCMs. Further, enemy aircraft generally fly at higher altitudes than ASCMs, enabling them to be detected farther away by shipboard radars whose visibility is limited by the horizon.

If the surface fleet is to implement distributed lethality, the place to start is with surface combatants. Today they lack the offensive capacity to pose a significant threat to enemy navies. Obtaining that capacity from the surface fleet’s main battery, the VLS magazine, will require that the Navy revisit fundamental aspects of how it fights. The alternative will be to continue devoting increasing portions of its weapons capacity to defense, and concepts such as distributed lethality will only exist in the pages of professional journals.

Bryan Clark is a Senior Fellow at the Center for Strategic and Budgetary Assessments. This post is adapted from his recent report “Commanding the Seas: A Plan to Reinvigorate U.S. Navy Surface Warfare.”