Note: This article was originally published in its original form in the Naval Institute’s blog and was cross-posted by permission.

On August 6th,CIMSEC ran a feature on the latest Japanese helicopter destroyer, the Izumo (DDH-183). CIMSEC contributor Miha Hribernik observed that the Izumo, which is supposedly capable of carrying an aviation squadron and boasts a 814 feet-long (248 meters) STOBAR (short take-off but arrested recovery) flight deck, is “sure to cause concern in China…[since the launching of the ship] presents a potent addition to the operational capabilities and strategic reach of the JMSDF.”

According to Business Insider, the helicopter destroyer “came in” shortly after China’s recent statement that it is in “no rush [to sign the proposed Code of Conduct] since [Southeast Asian nations involved] harbor unrealistic expectations.” Japan’s territorial row involving Diaoyu/Senkaku coupled with threats emanating from the DPRK (Democratic Republic of Korea) might have triggered increased defense spending. However, the two aims of Japan’s burgeoning defense spending, pre-emptive strike capabilities and the creation of an amphibious assault unit similar to the United States Marine Corps, have made its East Asian neighbors uneasy. As for America’s reaction, Zachary Keck believes that while it is “unclear” how the Obama Administration will respond to Japan’s pre-emptive attack on its “adversary’s bases,” the Obama Administration could become “vocal” should Japan act upon its “threats to review [its] past apologies.” 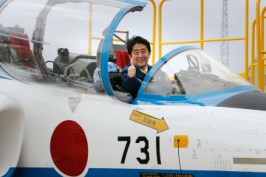 In light of the fact that the ROK (Republic of Korea), China and Japan are seeking to boost their naval capabilities in recent years, some now fear that East Asian countries may have entered into a “regional naval competition.” One explanation for the naval race, as recent territorial rows and controversies over Japan’s wartime atrocities demonstrate, is that the ongoing tension in East Asia remains rooted in historical grievances. Osaka mayor Toru Hashimoto’s remark in May that wartime brothels were “necessary…to maintain military discipline” coupled with the photo of Shinzo Abe inside the cockpit of a T-4 trainer with thenumber 731 stenciled on its fuselage seemed to evoke among the Chinese and Koreans memories of  Japan’s imperial aggression during the Pacific War. Indeed, Japan’s seemingly strident militarist overtone may have worsenedthe extant historical enmity among the three major East Asian countries.

To the historical grievances must be added another dimension—the fierce competition for energy resources. According to the National Geographic, “how much oil and natural gas is at stake, in either the South China or the East China Sea, is unclear [since] territorial disputes have prevented any reliable survey.” Nonetheless, each country’s efforts to “guarantee access to resources” will indubitably enhance its ability to “to shape international events according to a new definition of self-interest, one matching [the country’s] status.” As regards the territorial row over Dokdo/Takeshima, some aver that contradictory claims are based on “sequence of centuries-old records and half-told versions of more recent history.” To the extent that natural resources may be concerned, the Dokdo/Takeshima islets, although “poor in fresh water necessary to sustain human life,” are “abundant in fish.” Furthermore, the island is said to “contain natural gas reserves estimated at 600 million tons.” It can be argued, therefore, that in the Dokdo/Takeshima dispute, as with that of Senkaku/Diaoyu, energy security will retain “great salience” in the years, if not decades, to come.

However, one major factor that may explain the exacerbating the East Asian arms race is the recent sequestration cuts within the Department of Defense which may make it more difficult for the United States to “manage its alliances and strategic partnerships in the region.”  Keck argues that a new geostrategic environment whereby the United States increasingly desires to see its East Asian allies “shoulder more of the burden for regional security” may the create the perception that the United States presence in the region has diminished despite its commitment to the “pivot to Asia” strategy.

Nevertheless, it is unlikely that peace in the region can be successfully maintained without the continued American presence in the region. While it may be true that “rational trust-building” diplomatic measures among East Asian states may somewhat temper the extant tension in East Asia, at present, the basis for mutual trust among East Asian states remains flimsy at best. For this reason, the United States must learn to “lead from behind” in East Asia by demonstrating its diplomatic prowess. To that end, the United States must seek cooperation with China in order to achieve stability on the Korean peninsula and to temper the tension over Senkaku/Diaoyu. With respect to Japan and the ROK, the United States can work to defuse tension over the competing claims to the Dokdo/Takeshima islets. One way in which the United States can defuse the naval race would be to help form a combined fleet whereby the United States Navy, together with its sister East Asian navies, “may share their unique resources and cultures to develop flexible responses against future threats.”

In short,  the ongoing naval race, as represented through the launching of the Izumo, is an outcome of deep-seated historical enmity and rivalries over increasingly scarce energy resources. While some may dismiss the possibility of a regional war, slight miscalculation among East Asian state actors may indeed spiral out of control and lead to a lethal war.

Notwithstanding the substantive defense budget cuts which could hamper flexible strategic responses, the United States nevertheless has a role to play to ensure peace in East Asia. “Leading from behind” to tame the ongoing East Asian naval race just may be the most cost effective way in which to exercise influence in the region.

Jeong Lee is a freelance writer and is also a Contributing Analyst for Wikistrat’s Asia-Pacific Desk. Lee’s writings on US defense and foreign policy issues and inter-Korean affairs have appeared on various online publications including East Asia Forum, the Georgetown Journal of International Affairs, the World Outline and CIMSEC’s NextWar blog.

NOTE: In a follow-up article entitled “More Than Meets the Eye in Asian Naval Race” published at RealClearDefense, I argue that the naval competition among the three East Asian countries is driven by each country’s desire to look after its own self-interests and not necessarily by desire for imperial expansion.